As the dog days of summer close in, I walk down the trail with sweat dripping, a small cloud of mosquitos in tow, Poison ivy brushing my ankles – but it’s still the coolest place in town.  A good number of degrees cooler, in fact, than the asphalt-clad regions surrounding. BCSNP, as the biggest chunk of pavement-free land in the city, is doing its part to reduce the urban heat island effect.

But the other part of “cool” (that word really dates me), is the revival in our forest of flowering forbs and shrubs, and the seeds they produce. Reinvigorating the seed bank, to get technical about it. Jewelweed is a great example; though preferred by deer, its seed-shooting strategy allows it to carpet the forest floor where the shade of invasive plants used to prevail.

The flowering shrub below, though just an ordinary Pasture Rose, Rosa carolina, is a happy find considering the takeover by invasive Rosa multiflora. It’s the first I’ve seen in BCSNP and is growing in a sunny clearing.

Sharing the same sunny opening are the native brambles, Common Blackberry, Rubus allegheniensis, and Black Raspberry, Rubus occidentalis. With flowers for pollinators, new shoots for deer, shelter for ground nesting birds, berries for many – these forest edge and gap species have it all covered.

A much rarer plant in our forest, the Wild Hydrangea, Hydrangea arborescens, (pic below) has a back story – it was almost extirpated at BCSNP by deer. It grows near the bottom of a rich slope that likely bordered the creek before channelization. Never abundant, (this is the only population in BCSNP) it had been eaten to the nubs for a number of seasons when I re-found it about four years ago. All that was required for a bounteous revival was a formidable deer exclusion barrier surrounding the site – composed of huge downed Bush honeysuckle from the slope above. More of this brush is added each year, allowing the Hydrangea patch to expand. I do love a solution that solves two problems at once! 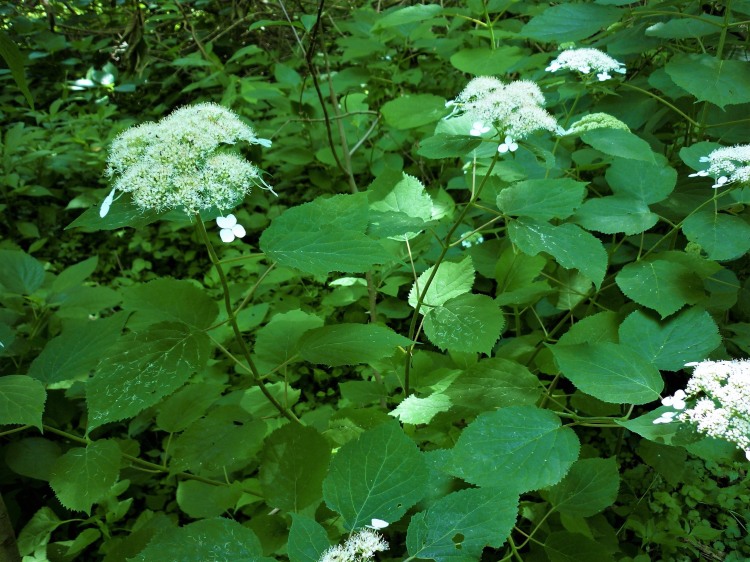 Why put so much work into this one plant species? Turns out it’s astoundingly beautiful – to pollinators. Unlike the showy but sterile blooms of our Snowball Bush cultivar, Wild Hydrangea’s wide flat inflorescence has hundreds of tiny fertile flowers providing nectar and pollen. The outermost showy white petals are just a come-on.

After three years of recovery, this summer’s really spectacular bloom is luring pollinators abundantly. Wild Hydrangea is also one of the only host plants for the large and colorful Hydrangea Silkmoth. I’ll be watching for its arrival!

And just below the Hydrangea patch, springing from the seasonally water filled slough and former creek bed, is a colony of Lizards Tail, Saururus cernuus. This wetland plant is clonal and can form vast colonies, but in our forest is limited to one site. It apparently spreads reluctantly by seed, since it hasn’t managed to cross the trail to the continuation of the slough on the other side. You can see it in bloom now near post #11. 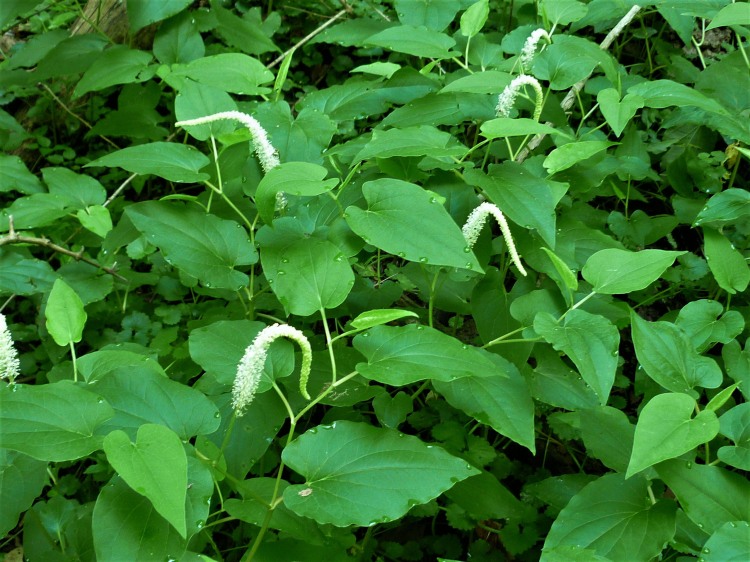 Unlike Wild Hydrangea, this genus contains “bioactive compounds” that make it distasteful to deer. Crushing the leaves releases a pungent Sassafras-like odor, a clue that Lizards Tail and its relatives have been used medicinally. 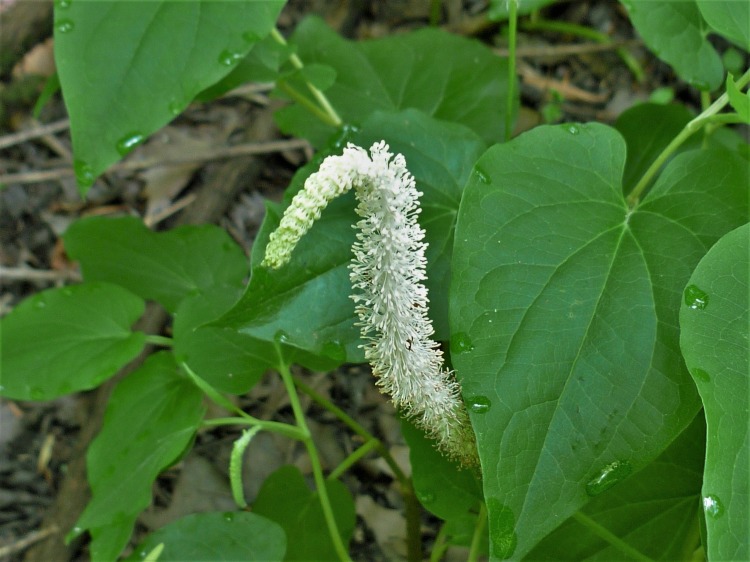 The nodding “tails” (racemes) have no petals or sepals, and depend on sheer numbers of the tiny flowers, as well as sweet scent, for their attraction.

Of course my posts wouldn’t be complete without a few animal pics, so here goes. These two, though blurry, tell a sobering tale. Little Browntail, as I call her, is one of the dominant doe’s yearling twins (note the mark on her side, you may see her along the trail). She has always shown the most curiosity of any deer I’ve ever met. Eyeing me at close range while I took the first pic, she then leaned over and began to eat the top off a young oak tree planted several years ago. Great evidence for why young trees have a dim future at BCSNP!