Yesterday’s adventure reminds me once again why Beargrass Creek SNP is my favorite place to hang out (with loppers and a saw). In the middle of nowhere in the heart of the city, I’m lopping away, when who should wander up but little Browntail? No surprise, she often comes to browse the honeysuckle “salad” left by my loppers.

She tucks in as usual…

… getting her fill of fresh cut leaves, she then buries her head in a blackberry thicket. I lift my loppers to get back to work, but notice a furtive movement off to the left – someone is watching. 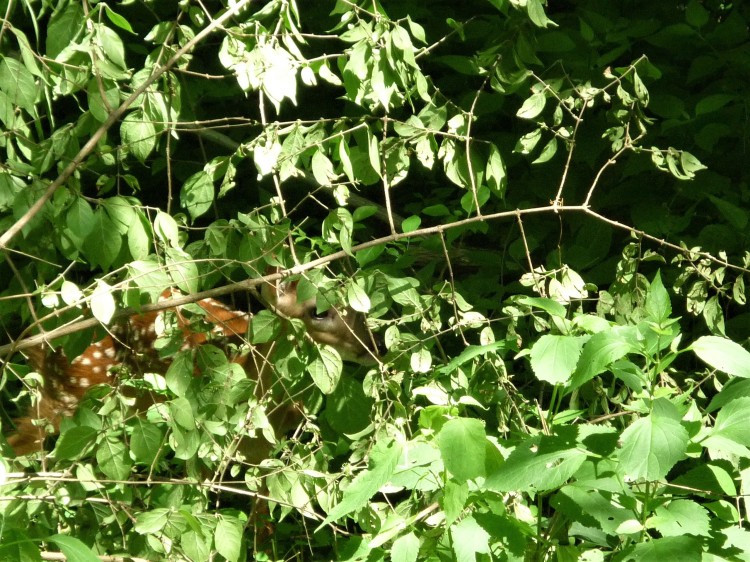 From behind a screen of cut honeysuckle peeks a spotted fawn. And now I remember; earlier in the morning I startled a pair of fawns from cover just up the hill. One ran away but the other lingered, bleating for mom, then slowly straggled off. Could this be the bleater? It appeared to have its sights set on Browntail, but I was in the way. Overcoming fear, the fawn slowly emerged.

Browntail also noticed, and I had a shocking thought – could she be the fawn’s mother? 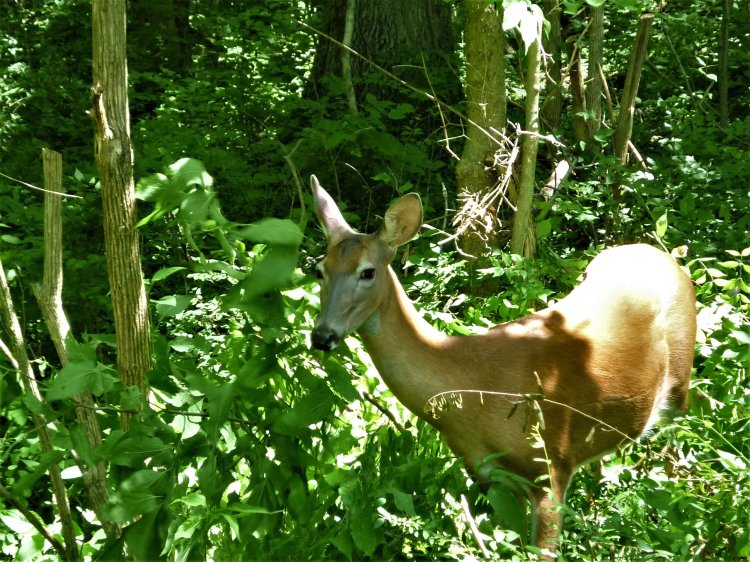 She’s a beautiful young doe, in prime condition. And though yearling does can breed, I was hoping she had not already started adding to our overabundant deer herd! It certainly was possible; Midwestern doe fawns that reach 70 pounds by late winter may enter puberty and breed, though later than in the main part of the rut. A combination of good nutrition and mild winters makes this possible – some yearlings even give birth to twins! But these first-time mothers lack experience and their fawns have lower survival rates.

After a friendly nose touch greeting (no pic, sorry), the fawn lingered near Browntail and even browsed a bit on the honeysuckle leaves. I was trying to get a peek at Browntail’s belly to see if she had active teats, but her lack of interest in the fawn seemed to suggest she wasn’t its mom. The fawns of yearling does are usually born later in summer anyway, since these does bred in late winter. But what if she was a half sister? Their acquaintance would make sense if the fawn was one of Big Momma’s new babies (Big Momma is the dominant doe who holds a very nice territory adjoining the Red Maple Trail. She and her offspring are often seen by hikers along the trail). As the “deer daughter” of Big Momma’s last year’s twins, Browntail would be allowed to hang out near her mother, even when grown, and to set up a territory next to hers.

Over time this mystery will likely solve itself, and I’ll gain more insight into the kinship of a deer family. It was a wonderful way to spend a morning, and get some work done to help the revival along.

Dear reader, if traipsing the back ways of the forest sounds like fun, you’re invited to pick up a pair of loppers and join us as a forest volunteer. Up-close deer viewing is just one of the many perks!