It’s impossible to cram the impressions from a nine day trip to Guatemala, or any part of the world, into a neat blog box. No matter how many hundreds of pictures I take, no matter how earnestly I choose my words, it’s doomed to be nothing more than a cheap snapshot of a place incredibly rich in culture and nature. And that’s what it is to be a tourist – forever skimming the surface, obsessively collecting images as if I can really hold onto, really understand, really feel anything that is going on around me.

That said, I’ll offer one more apology for forgetting the battery charger to my little blogging camera (instead my pictures were taken by my very cheap phone, my son took the better ones with his expensive phone). So no fabulous wildlife pictures, flaming forest birds, etc. All the better – you can find these on Google images. But I will try to share the stuff I encountered along the way, almost stepped on, or was alerted to by our incredible guide at El Tikal, Marlon Diaz. 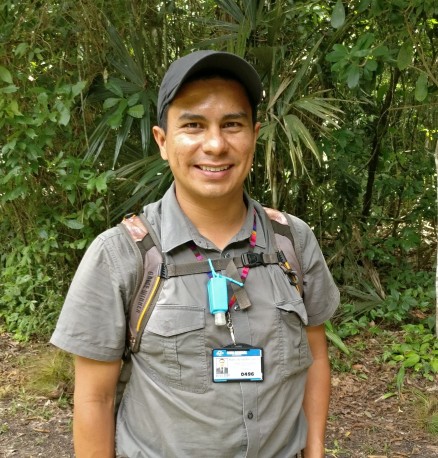 As a fellow naturalist I am in awe of this man. When just a young teen he moved with his family to the Peten, near Tikal National Park, and became enamored of the ancient Mayan city and the jungle that enveloped it. Working as a guide since his late teens, he holds a graduate degree in combined Mayan studies, tourism management and biology. He now runs his own agency, Gem Trips  http://www.gemtrips.com/en. Needless to say he was an incredible guide, able to answer my every nature question, delve deep into theories about the decline of Tikal, or expound on the management zones of the Maya Biosphere Reserve (the heart of which is Tikal). Our family started the day’s trek with Marlin at 4:00 am, just as the howler monkeys were waking up and starting to growl.

In the pre-dawn dimness we stood under a giant Ceiba (Kapok) tree, and listened to the awakening. One of my lasting impressions is the richness of vocalizations uttered by the forest inhabitants. Howler monkeys have the honor of being the loudest land animal; but they’re mostly smoke and no fire. These relatively peaceful primates engage in horrific growl-fests, especially at dawn, to keep territorial issues sorted out. (In at least one instance, a newbie archaeologist back in the day assumed it was the growling of  jaguars, and barricaded himself in his shelter. )

Another abundant sound memory is the bizarre vocalization of the Montezuma Oropendula. This good-sized bird in the blackbird clan builds communities of pendulous nests that can be seen dangling in the lower canopy. Even an ornithologist was challenged trying to convey the sound quality of the Oropendula’s song:

“It would almost be impossible to describe the note of this bird, as it is totally different from any other with which I am acquainted. I have sometimes heard a similar noise produced by a cart-wheel that needed greasing, but a cart-wheel makes so many different noises that the comparison is almost a useless one.”  Charles C. Nutting 1883

In my opinion, some blend of gurgling, squeaking and the sound of running water.

Another midday sound that went on endlessly was the table-saw whine of cicadas; likely the species below, the Emerald Cicada. Among the many new plants and animals this one seemed a bit more familiar, particularly after this past spring’s red-eyed emergence.

To my visual mind, the cicada’s bold black patterns seemed to eerily echo the patterns of Mayan hieroglyphs on the ruins.

Bright orange millipedes also impressed us as both familiar and strange.

This heavily armored Lubber grasshopper added his share of sound by rubbing fore and hindwings together, (that is if it’s a he). They were all about us mating and were easy to pick up. Taking short flights to escape, their wings flashed a brilliant red underside. 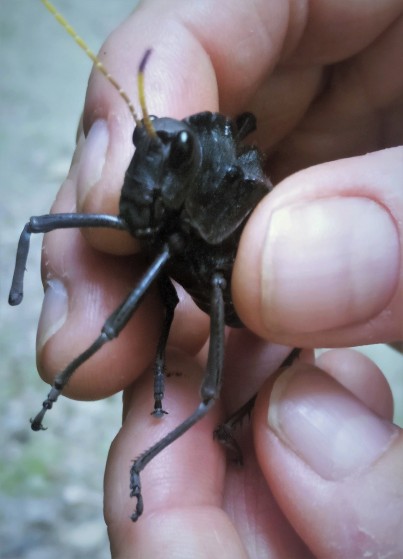 By the time we reached the Great Plaza, it was sunny and hot – and almost deserted. This was “low season” for tourists – I can only imagine how busy it must have been 2000 years ago.

Climbing the high steps of a temple, I found this seed pod on an upper platform. Innocently wondering how it got there, I carried it back to Marlin.

Turns out I had removed a sacred Mayan offering of Cacao seeds. Resigned to carting it all the way back, I lucked out and met some German guys headed up who were happy to place it back where it belonged.

Marlin next led us down narrow jungle trails that were likely animal paths for creatures such as Coatimundis. These raccoon cousins run up and down trees like squirrels, using their long striped tails for balance. Apparently predators are scarce at Tikal since we saw large groups of adults and young, some scavenging cheetos from tourists.

We came upon a lovely pale tree with peeling bark that looked a bit like Sycamore, but when Marlin crushed some leaves the pungent odor of Allspice was released. Cacao drinks in ancient Tikal were flavored with this warm spice. Though old Christopher C. was nowhere near the Spice Islands when he bumped into the New World, he did bring back Allspice, as well as Red peppers and Vanilla. 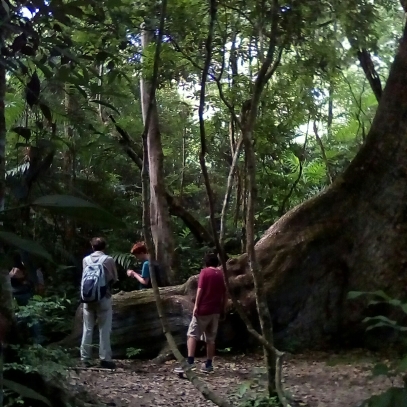 Insects have their own roads here: Leafcutter Ant pathway, and Termite trail made of chewed leaf pulp. 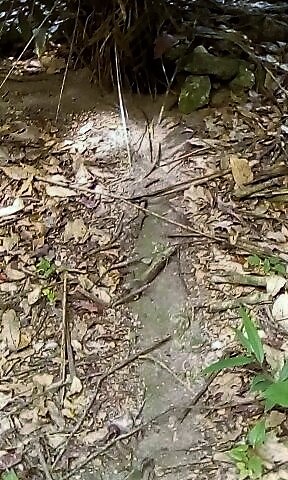 In a clearing we met a colorful Ocellated Turkey, a much scarcer bird than the now abundant North American species (which had to be rescued from potential extinction in the early 1900’s). With a very small range, and lots of hungry people, Ocellated Turkeys are not exactly thriving. Life is very tenuous for all big, edible endemic birds in Guatemala, but the Tikal turkeys have it good. Though Kentucky turkeys are pretty showy, their plumage can’t compare with the astounding range of blues and greens found on this tropical forest fowl.

On the edge of the clearing were wild Avocado trees; the ground below littered with ripe fruit and no eaters in sight. The mystery of such untouched abundance intrigued ecologists Dan Janzen and Paul Martin, who came up with the hypothesis of “anachronistic fruits”. It’s pretty simple: plants that produce fruits too big or tough for today’s animals likely depended on extinct “megafauna” to disperse their seeds. Think giant Ground Sloths, Mammoths and more. This nice relationship, which likely took eons to evolve, was snuffed out when humans learned how to kill big game. Fortunately for the tasty Avocado, we became its surrogate dispersers. A good read on this topic: “The Ghosts Of Evolution: Nonsensical Fruit, Missing Partners, and Other Ecological Anachronisms ” by Connie Barlow.

Another mystery – the purpose of these shallow stone basins found throughout the park. Marlin explained they’re not connected in any way to ancient Mayan rites; but were constructed as a water source for wildlife. During times of drought, the basins ensure that animals will not need to search for water outside the park, where they are an unprotected moving target. 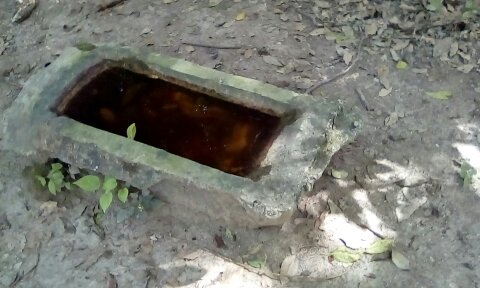 The forest here looks a bit different than what I’m used to in Kentucky. 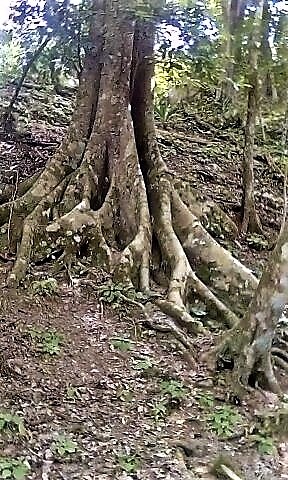 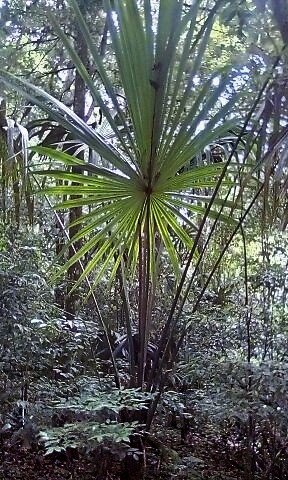 Seven and a half hours later, back at the Ceiba (pronounced say-bah, most sacred tree of the Maya, national symbol of Guatemala, not to be cut down. We saw them towering over cleared fields on our long bus rides). This particular Ceiba must be in millions of tourist photos, as it is near the entrance to Tikal.

Saying our fond good-byes to Marlin, we headed to where the shuttle buses waited, but I had to take one last photo of this plastic trash bucket. The neat repair job spoke of an admirable thriftiness and can-do spirit – never in America have I seen anything like it. 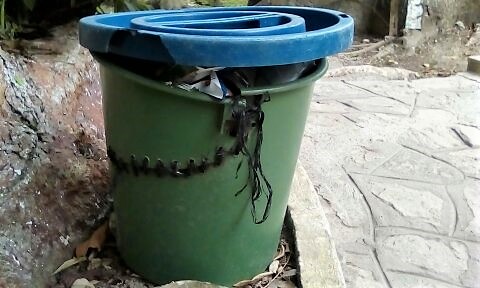 Some more photos from our trip I  could not resist posting.  At a fancy hotel in Antigua: Scarlet Macaws rescued from the pet trade (most stolen as nestlings) hang out on perches in a vast leafy courtyard. Indoors, an exhibit of ancient Mayan art included this Macaw headed jar lid. 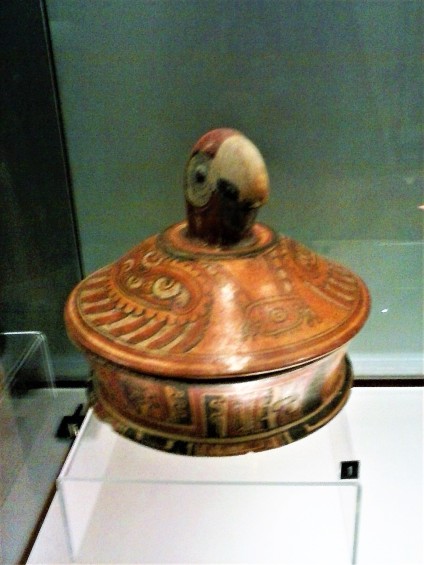 Every night in Flores, thousands of swallows come in from hunting insects over Lake Peten Itza, and settle on wires over the busiest part of the waterfront restaurant area. Do they feel safer amid the lights, noise, and commotion? 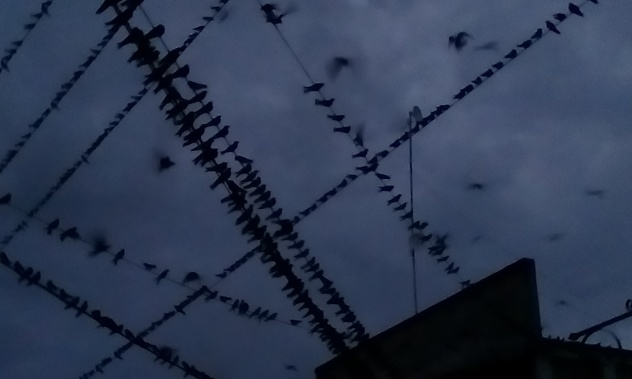 Chickens for dinner in the Antigua market.  Maybe it’ll help nudge a few budding vegetarians in the right direction. 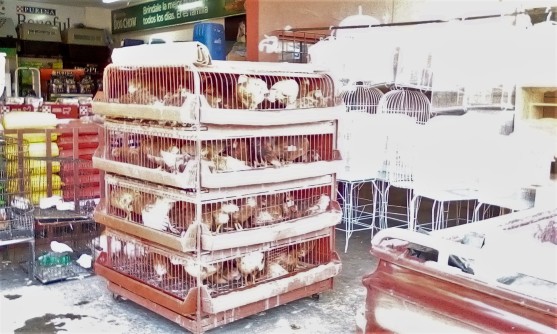 My son holding hands with a Spider Monkey at the Petencito animal park.

Hope you’ve enjoyed this snapshot of a bit of our visit to Guatemala. Since my focus is nature, there are many things left out; about that I will only say – for those who think there’s a lot to gripe about in America, I recommend a trip to Guatemala. You’ll come back humbled by the patient spirit of the Maya, a people who know how to survive. 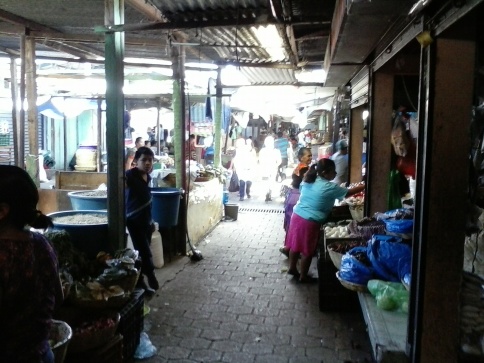 (A good read for anyone interested in the harsh history of Guatemala: “Bird of Life, Bird of Death” by Jonathon Maslow 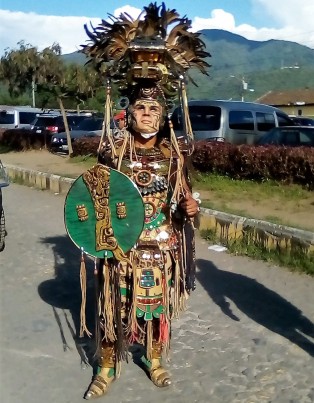