If you’ve been reading this blog for awhile, you know our forest is a haven for Box Turtles. And just like the rest of us, some turtles are more fortunate than others.  Life is not fair – I’ve seen healthy old turtles without a mark on their carapace, and young ones that were chewed on, damaged by mowers, or just plain run over and dead. Within the past week I’ve met two box turtles with very different life stories…

The first was an old acquaintance, turtle #5, 37, 87, 138, 216, who walked across my loppers one recent morning. With bright orange and black facial patterning, he’s a flamboyantly colorful male; like many of our urban turtles he feels no need to close his plastron tight at the sight of a human. His coloration, outgoing personality, and reliable location likely account for the large number of sightings in my notebook. He was only the 5th turtle observed when I started the Box Turtle data collection project in 2013, and was also just noted as sighting #216.

Why do some male Box Turtles have such bright coloration? Though there’s very little research on this topic, we do know that many other species have evolved “sexual dimorphism” traits of various kinds. When the male of a species is quite a bit more colorful or ornamented, the reason is usually sexual selection. Females of course are doing the selecting, in hopes of choosing the fittest mate. The whole topic of color vision in animals is quite complicated; but as you might guess, outward coloration is only a factor for species that can perceive it – and box turtles see colors very well.

The link below is very interesting though scholarly, and discusses coloration and sexual selection in turtles, among other things.    https://www.researchgate.net/publication/283038333_Turtles_Are_Not_Just_Walking_Stones_Conspicuous_Coloration_and_Sexual_Selection_in_Freshwater_Turtles 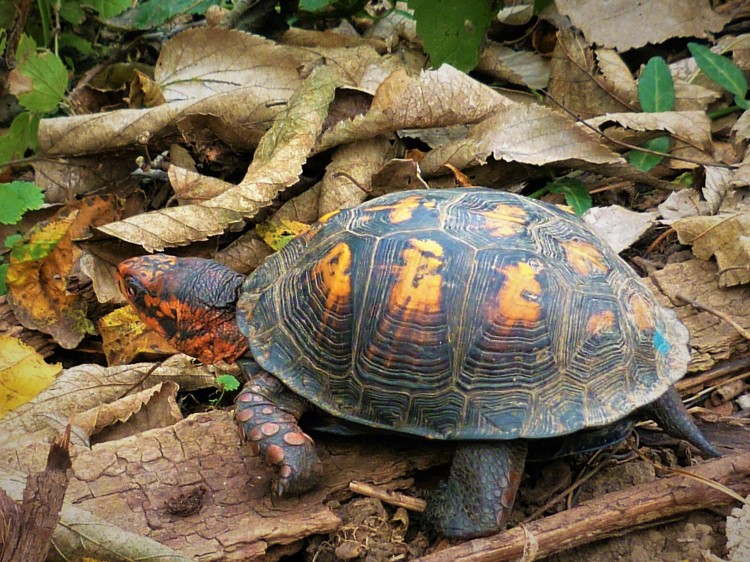 It’s also interesting that some of the brightest coloration in male Box Turtles is often found on the head, which can easily be hidden when predators are around (though many turtle predators can’t see color nearly as as well).  The link explains why some animals have very unique color vision. https://www.nytimes.com/2016/08/20/science/some-turtles-see-red-better-than-you-do.html

The facial markings are so distinct on turtle #5, 37, etc. that I know it’s him at a glance. It  isn’t much of a stretch to wonder if turtles also recognize each other by their facial markings. One thing is for sure – he’s a fortunate turtle, with a fine chance of living a long healthy life in excellent habitat, and very likely getting to pass on his genes a good bit.

But our next turtle had the cards stacked against her.

You can see some of her problems in the above pic, such as growth deformity and/or healed wounds on top of her carapace, and old wounds on her head. She was recently found by the master gardeners in the LNC Sensory Garden, where I’m guessing she may have been dumped.

The injuries to her plastron are extensive, and of a type I’ve never seen in a wild Box Turtle. It almost looks like infectious “shell rot” that could have been caused by poor housing in captivity.  It’s hard to understand how a section of her plastron became detached and was left dangling with no other impact trauma to her bony structure. 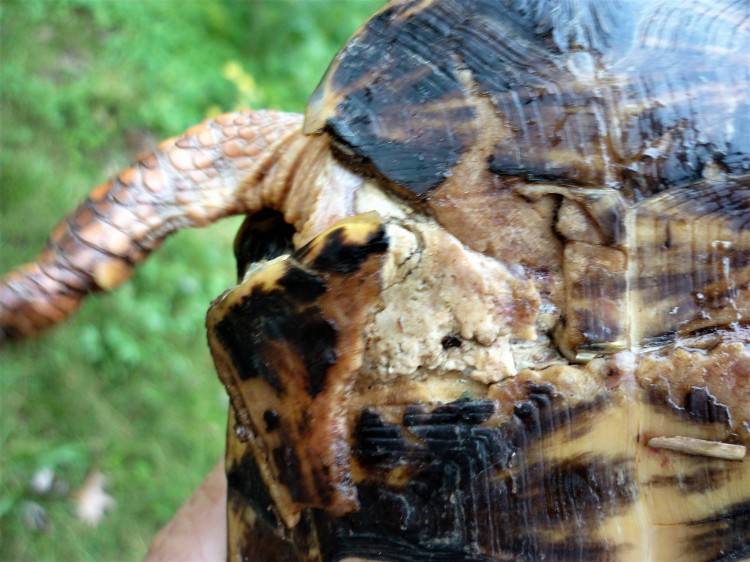 I know this is not a pleasant pic to look at, but it may help you decide what to do if you have, or find, a turtle with such issues. The wounds on her plastron have a chronic  infection that will require treatment by a vet, and the dangling piece of plastron needs to be removed. This made the decision of what to do next a bit easier; after keeping her for a couple days sheltering under leaves in a dark bin, we headed out yesterday to Broadbent Wildlife Rehab Center near Brandenburg. This is an amazing facility, and the only one in our area that will take injured box turtles and rehab them. We saw turtles there that had extensive patching of their carapace with fiberglass, as in the pic below. The carapace will continue to heal beneath the fiberglass.

While I had her at home, I did give daily soaks in shallow warm water, followed by a rinse of the wounds with hydrogen peroxide. She refused to eat, though was otherwise very active and did not close up when handled. Keeping her in the dark bin under the leaves was comforting I think; at any rate it prevented her from constantly trying to climb out (never underestimate the climbing ability of Box Turtles!) 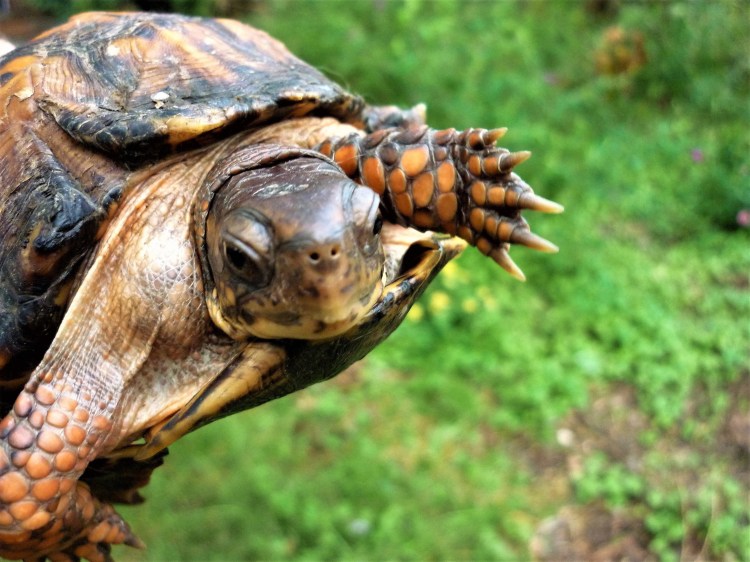 So perhaps this little female boxie is a lucky turtle too; if her luck continues she could successfully reintegrate to wild habitat on Broadbent’s 4000 acres.  Possibly living many more decades, laying many more clutches of eggs and just being part of the biodiverse web of the natural world.

It was a long drive to Broadbent, but I think it was worth it.