If that title sounds inviting, you may be one of the rare breed who actually enjoys black and white photography. In our color saturated world of digital screens, it’s an odd choice to go monotone. Like seeking out vinyl records (the kind I grew up with), it seems perversely retro. But in my opinion it’s not – there’s actually a reason to forsake color sometimes…

The reason is to see – without color’s seductive distraction. As primates and omnivores we’re very good at seeing color. Fruits and berries clamored for our ancestor’s attention; we tend to prefer the bright over the somber. If you somehow feel cheated out of the brilliant red of these ripe Jack in the Pulpit berries, it’s understandable.

So how to explain the lasting appeal of monotone images? For me it’s about perception. In monotone I notice the berries’ odd contours, how they’re molded by each other in the tightness of the cluster. A bright sheen adds to their eye appeal, but at the top of the cluster they’re wrinkling and a few seeds are exposed. Would I have seen all this as clearly if they were brilliant red? Maybe, maybe not. Many mammals don’t see color well; it would only distract from what  they need to notice most – movement, pattern, sound, scent. 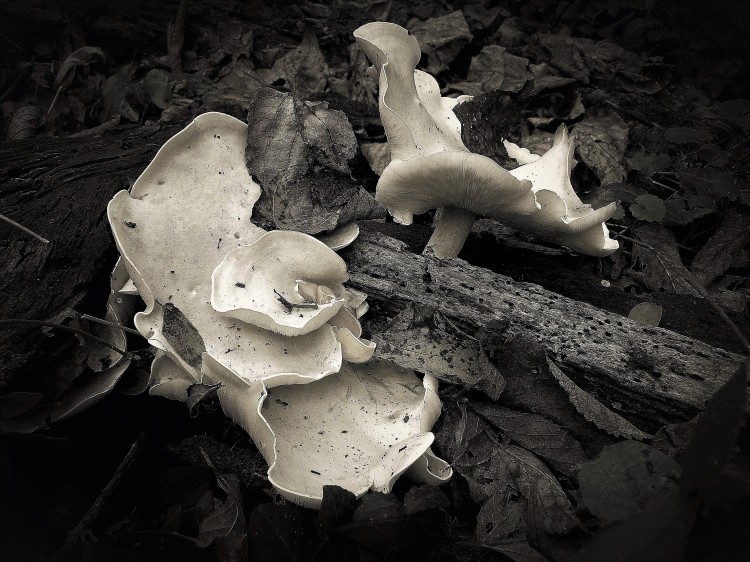 This convoluted Oyster Mushroom Pleurotus ostreatus, looks about the same in a color image, since it’s lacking in bright pigments. Still, its delicate tonal balance is better appreciated in bl. and white. If you’re wondering why so much “art talk” in a nature blog – it’s because the blogger is a visual artist. Mostly a botanical illustrator, but having dabbled in bl. and white photography as well. I never enjoyed the darkroom experience – mixing chemicals, breathing fumes, spending lots of money on film and paper, waiting around in the dark, printing the same thing over and over to get it right, etc….

Such a pleasure to use the photo editor instead! Now I actually convert color pics to monotone and manipulate them for the desired effect.

A hibernating Zigzag Salamander Plethodon dorsalis, dug up by me while planting Spicebush; a common misfortune for small creatures in this forest (See earlier posts 4/21 – Frog at the Door, and 3/10 – Box Turtle #115, 143, 182 Gets a Rude Awakening). In this image I stepped up the contrast of dark and light to bring out the lovely sheen, the salt and pepper speckles, the regular rows of “costal grooves”. You’ll be happy to know the salamander wasn’t injured, and it quickly burrowed back down.

Do you recognize the commonly seen seed capsule in this image? It’s Spotted Jewelweed Impatiens capensis, retaining only a hint of it’s juicy green coloration. The aim of this image is to bring out the translucency of the capsule, the way the ripening seed is visible as a dark mass. 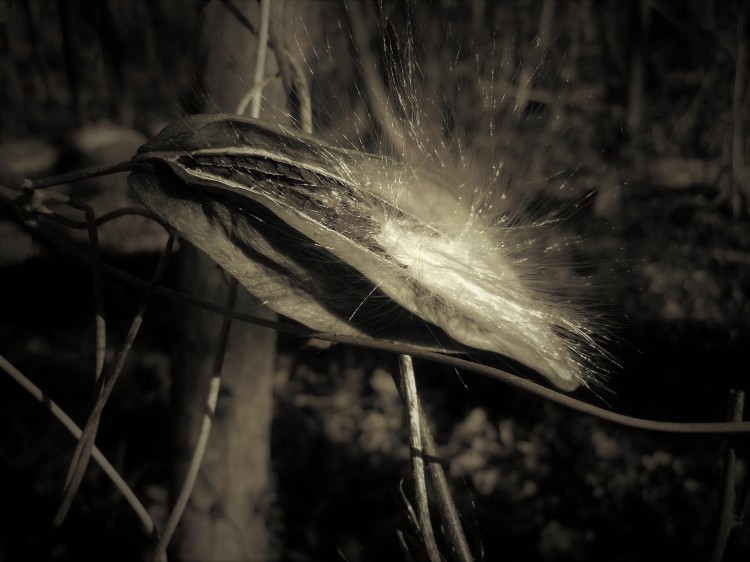 The seedpod of a plant you’re less likely to have seen along the trail, but common in our forest; Angularfruit Milkvine Gonolobus suberosus. If it reminds you of Milkweed, you’re a good botanical observer; this vine is in the Ascelpiadaceae, or Milkweed family. As for how it’s presented, the warm dark “sepia” tone is a nice alternative to the sometimes cold look of bl. and white photos.

This pic of a fox track has a back story; it’s on the edge of a small watering hole created by an unknown (human) visitor. They carefully dammed up a portion of a small stream with mud walls; the very first night it was visited by a number of animals including this fox. Though the original image didn’t have much color anyway, a warm monotone enhances the feeling of  moist “mudness” and the shimmer of water. 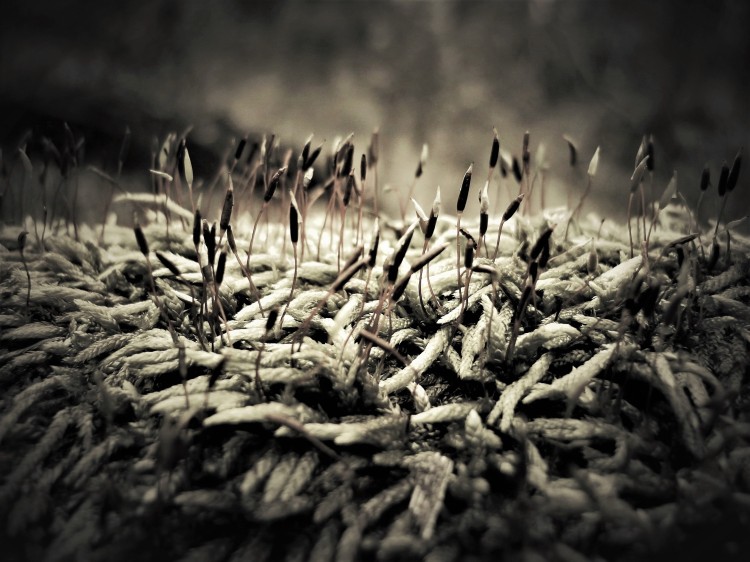 Rediscovering the familiar as strange – these Flat Glaze Moss, Entodon cladorrhizans, spore capsules are only an inch tall, but they could be a forest of Seussian trees. As someone who needs glasses to see anything up close, I was startled by the robust spiky texture of the moss fronds.

If you enjoy nature photography of any sort, winter is a fine time for it. One is relieved of color’s distraction simply by the season, and the wall of greenery has come down. We’re allowed a glimpse of the bare bones of the forest -sometimes even the real ones.