Got a taste of the new February this past Sunday. 52 degrees and waves of Sandhill Cranes surging north, the forest filled with their ancient shrill croaking. Once you’ve learned this call you won’t forget it; you’ll always look up when they’re passing overheard. As the flocks moved over the forest they were flying low and circling, seeking a better stream of wind to ride on. I could barely focus on anything else; the sound of cranes is one of my gateways to an altered state of mind. 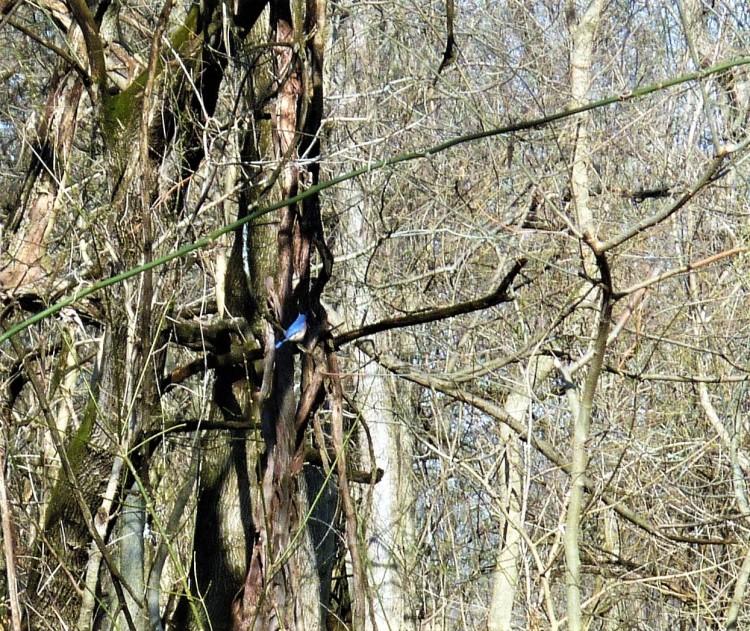 And then something small and blue, too blue for a bluejay. A flash of rusty breast – a male and female bluebird flitting among bare trees. I can hardly see a bird without binoculars, but got lucky with the camera, catching one tiny blue spot against the shadow of a trunk.

Digging to plant a spicebush, I uncovered this jewel. Six-Spotted Tiger Beetles, Cicindela sexguttata, hibernate in the soil – this one was pretty cold and slow. Though commonly spotted in the middle of the trail in summer, they’re extremely fast and dash on ahead as one approaches. (It wasn’t injured by my shovel, the apparently missing body parts are hidden by the soil.

The forest looks bare – too bare, thanks to the fast progress we’ve made this past year removing invasive plants. In the pic above the only native shrub in sight is the small orange tagged Spicebush in the foreground. As I noted in earlier posts, while it’s nice to have such a great view through the trees, this isn’t a more healthy condition than were the dense thickets of invasive plants. In some ways it’s even worse, particularly for birds (see 11/1 “What Would A Bird Say”). Right now the forest is in an awkward stage of recovery, having lost much of the shrub layer that dominated here for decades.

Sunday’s birdy encounters got me thinking about the habitat potential of this forest for breeding birds and migrants alike. Thrushes are a good example; though Robins are abundant, the other native thrushes have been particularly hard hit by tropical deforestation, habitat fragmentation, nest predators and cowbirds.

Wood Thrushes breed at a few sites in this forest, and likely won’t appreciate our campaign of large invasive shrub removal. They nest no higher than 10 to 20 feet from the ground, usually near the top of large dense shrubs or in the fork of a sapling. Good dense shrubby architecture and leafiness are obviously important to conceal nests from predators and parasites (during nesting season, the female Wood thrush stays on the nest at night, but researchers have found that males roost elsewhere in very dense cover for safety.) Though an important factor in Wood Thrush nesting success is forest size, our fragment has a large enough interior to provide quality habitat, if the shrub layer is well developed.

Quoting from the study NEST-SITE SELECTION AND NESTING SUCCESS OF WOOD
THRUSHES by Jeffrey P Hoover and  Margaret C. Brittingham 1998:
“Nearly 77% of all nests were built in shrubs with 70% built in Spicebush –Lindera benzoin (emphasis mine), Witch hazel – Hammamelis virginiana, or Tartarian honeysuckle – Lonicera tatarica.”

Spicebush, Lindera benzoin, is one shrub that’s going to be very important to the recovery of this forest. Ideally suited to moist bottomlands, it’s one of the few native shrubs that already has a good presence and is increasing. Adding to the habitat value of Spicebush, its high lipid fruits are a perfect match for migrating thrushes, whose favorite berry color is red. Though the equally red Bush Honeysuckle berries are popular with birds, they’re also low-fat junk food. Fatty berries provide better fuel for the the hard work of migration. (Interestingly, these two shrubs seem to be niche competitors, with similar spreading form, height, and berry production. The Bush Honeysuckle uber-cultivar that was unleashed on our landscapes outcompetes by leafing out earlier, growing faster, casting heavy shade, and producing more berries.)

Early spring is bare root planting season, and we’re planting a lot of Spicebush. Two year old bare roots planted in good locations (moist soil, very light shade) can start producing fruit within two to three years. The more we plant the more we get, as birds and small animals disperse the seeds through the forest.

Fortunately some things won’t need planting. One pawpaw seed can start a clonal patch that will keep on expanding. When the seed bank finally becomes saturated with the seeds of native herbs, shrubs and trees, that will be a happy day! Meanwhile the forest stewards will keep on digging holes.

(For your viewing pleasure, most images are high resolution and look best on a full screen)