Whether it’s the alarm clock forcing you out of bed, or the breaking dawn telling you to sing – everybody has to wake up sometime. If you’ve been sleeping for six months in the earth, I imagine it might be a little harder. But for at least one Box turtle in our forest today was the day. Look closely at the pic above, it’s more than just mud.

That’s his red eye in the middle of the pic; go to full screen and you can see his mud-covered snout and the edge of his carapace. Though he sat in his form and glared at me while I snapped these pics, his sluggish demeanor was deceiving. An hour later I returned and he was gone. Lest you think I have turtle radar, the pic below shows what I saw first – a glimpse of brightly colored carapace under a brush fence.

The Box turtle wake-up signal is rainy, mild weather in April, so I went out early yesterday hoping to find newly emerged boxies. The muddy one was number 3 for the week; the previous two were encountered during last week’s warm days and at the start of the rain. 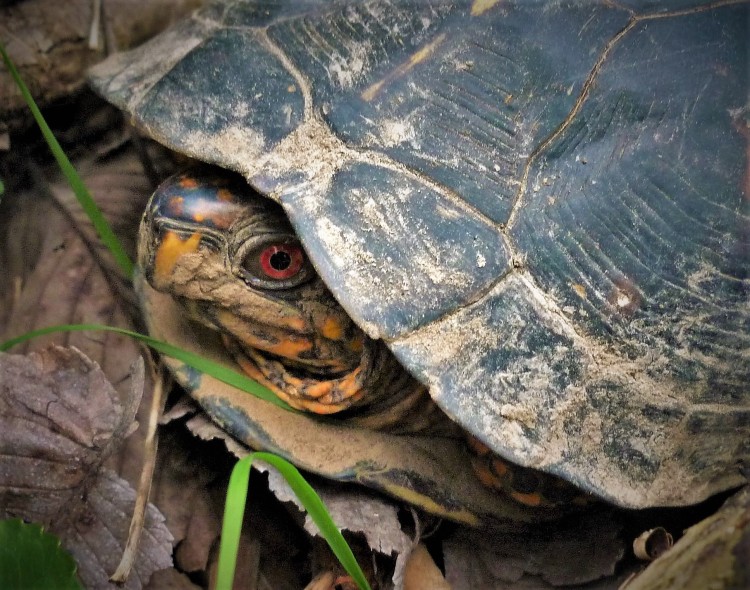 This older male is still crusted with mud, a vestige of his long winter sleep. He was previously observed in 2016 about an eighth of a mile away, and I recognized him right away by the unique look of his carapace. Most of one scute appears to be gone, replaced by a mottled healed patch. No telling how long ago this may have occurred; by the worn smoothness above and below, and the deeply scalloped edges of his carapace, this turtle appears to be pretty old. The pattern on his carapace scutes is the most minimal I’ve ever seen; very likely it was once more elaborate. 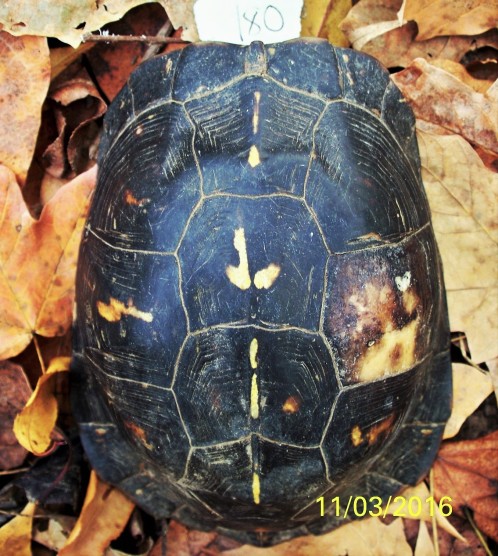 The date of Nov. 3 makes him the next-to-last turtle seen above ground that year. Now, as one of the first out in spring, he seems to have a pattern of late to bed and early to rise. Box turtles are quite variable in their “brumation” (reptile hibernation) timing, which is likely a survival adaptation. Stay out later in fall, wake up earlier – there’s more time to eat, but you might get caught by bad weather far from your hibernaculum. This turtle seems to have played the odds well. When I found him last week, he was hunkering down for the night in a sheltered crevice where two logs crossed. 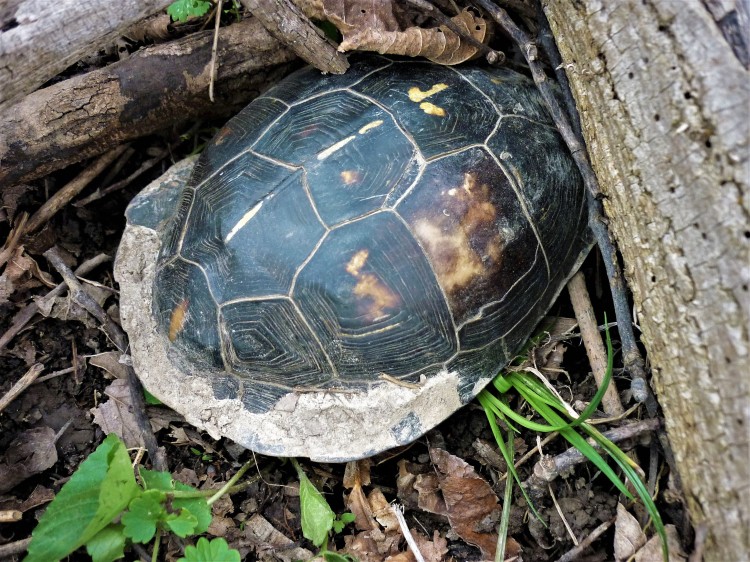 Every Box turtle I meet in this forest is an opportunity to understand, not only a particular individual, but the makeup of this unique urban population. After seeing so many in the last few years, patterns begin to emerge. How many males and females are there, how many young or very old, how much do they move around, where do they hang out the most? These are important questions that can be at least partially answered by careful data collection. It takes time – since starting this project in 2013, I am still meeting new turtles in areas I frequent. 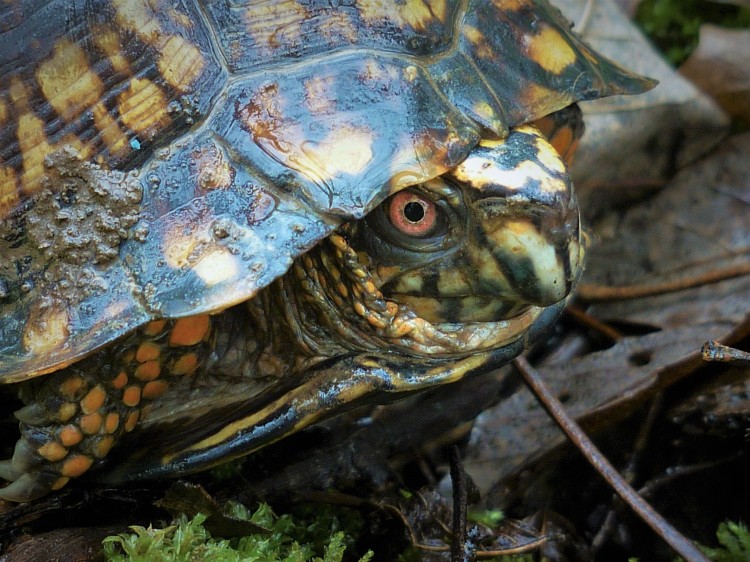 The Box turtle above is a good example; I met him near the trail in a place I’ve been many times. Though he looked familiar, his rather standard markings made it hard to figure out if he was in my data book. I never found a match, so for now he is a “new” turtle. Hopefully we’ll meet again, and his very pale red eyes will help me recognize him if we do. 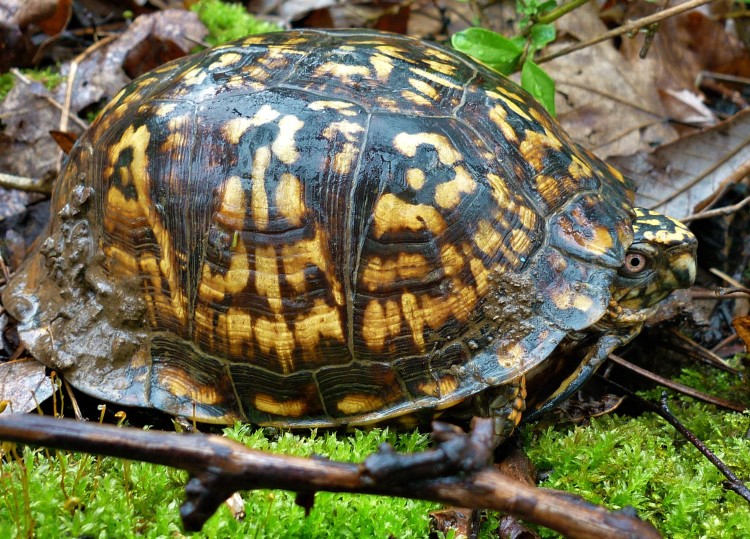 A juvenile Five lined Skink, Eumeces fasciatus, in the LNC garden is already working on a second tail.

Couldn’t resist sharing this one – Jack in the Pulpit Arisaema triphyllum, is becoming more common in this forest as invasive plants diminish. Fortunately it’s not bothered much by deer, except for the occasional bitten-off flower. Another reason it’s common; Box Turtles are important dispersers of the brilliant red berries, which flop to the ground as they ripen.