Growing up as a city kid in the ’60’s, bluebirds seemed like faraway mythical creatures. I’d never actually seen one, but read that people built special trails for them with boxes to nest in. Once while hiking we came across just such a box mounted on a fence post -but alas, no bluebirds. Years later, living on the west coast, I came to know both western and mountain bluebirds and to recognize their calls. So when I finally heard that distinctive little “cheery-we” call in this forest, I knew Eastern bluebirds were about.

Eastern bluebird populations were likely at their lowest ebb during my childhood, due to the unfortunate convergance of DDT, fire suppression, House sparrows, Starlings, habitat loss, severe winters, and chainsaws (more snags removed). But fortunately for the well-loved bluebird, its decline was noticed. The single most important action in its recovery (besides banning agricultural DDT use), was one taken by ordinary people – the creation of nestbox “bluebird trails”. The idea that anyone could pitch in to help a species in trouble was somewhat new, but the plight of the bluebird captured the public imagination.

Close to home, blue bird conservationists William and Azalea Duncan wrote a newsletter, set up numerous bluebird trails in Jefferson County, KY and developed the “Duncan” nest box with a round hole an inch and a half in diameter.

The nestbox campaign paid off, and sixty years later bluebirds are thriving again. Their population is estimated to be about 20 million and increasing. Which is likely why foraging flocks now drift through our little fragment every winter. 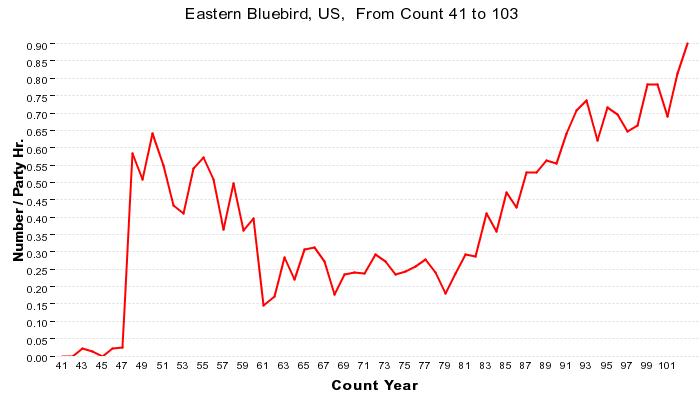 But another reason they keep coming is the habitat – apparently we’ve created excellent bluebird winter foraging grounds. Little did I know, when years ago we began to cut Bush honeysuckle shrubs at a height of 4 or 5 feet, that one day they would be bluebird perches! Woods that were overwhelmed by these giant spreading shrubs are now a sea of stumps.

Sitting quietly on a stump or low perch, bluebirds scan the ground for minute movement in the leaf litter, then swoop down to snatch their prey. Even in winter these moist bottomland soils are rich in sowbugs, snails, centipedes, insect larvae, spiders, etc. – all on the bluebird menu. They don’t go for earthworms like their robin cousins, unless nothing else can be found. Though berries are an important fall and winter food, there don’t seem to be any left in this forest, so their gleanings must be entirely of the arthropod sort.

The bluebird flocks I’ve observed this winter were foraging most actively just around dusk. Last week I followed a small band as they drifted through the understory, mostly ignoring my presence. It was a thrill to be so close, but waning light and numb fingers made it hard to hold the camera steady. 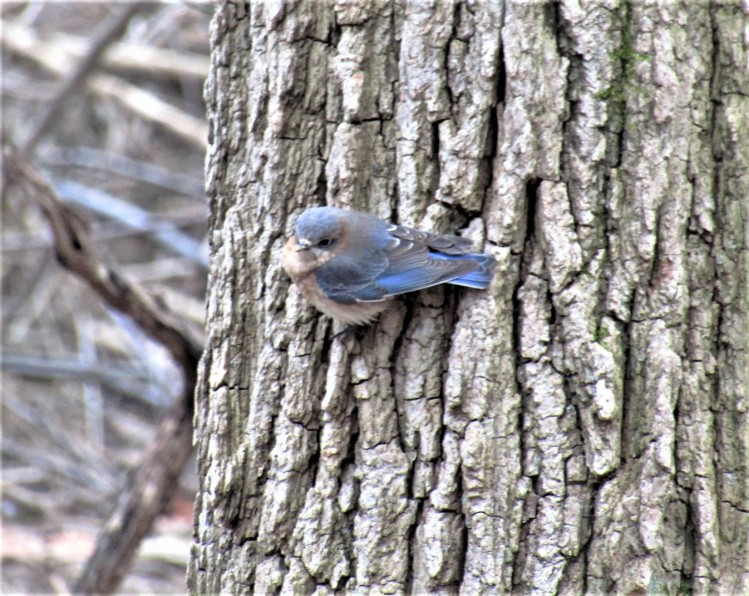 Lacking a handy perch, the bluebirds clung to the sides of trees while scanning for food. I couldn’t get an image of one actually on the ground, since their habit seems to be grab and go.

Bluebirds look very different from other thrushes – as they evolved to become open country birds, the dull browns of their forest dwelling clan were exchanged for hues that mirror the sky. It feels odd to see them in a forest, their bright blues the only spark of color among the winter-grey trees. 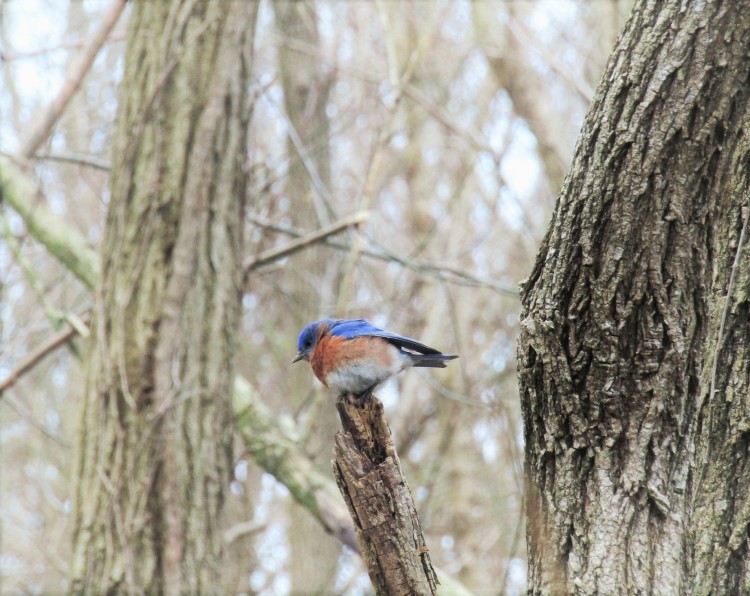 Will some of them stick around to nest? There is potential breeding habitat on the edges of the forest, but also plenty of competition from woodpeckers, House sparrows, Starlings, and House wrens. Despite the increasing number of dead trees, nesting cavities are at a premium since only woodpeckers can make them. Though historically bluebirds nested entirely in cavities, times have changed and most of the population relies on nest boxes. After last week’s bluebird sighting, I bought a few handmade cedar boxes, and will try to get them up soon. It may be a longshot, but wouldn’t it be great to see bluebirds nesting in urban Lousiville?

If you have nesting bluebirds on your property, please share your experience. I’d love to learn more about their habitat needs.