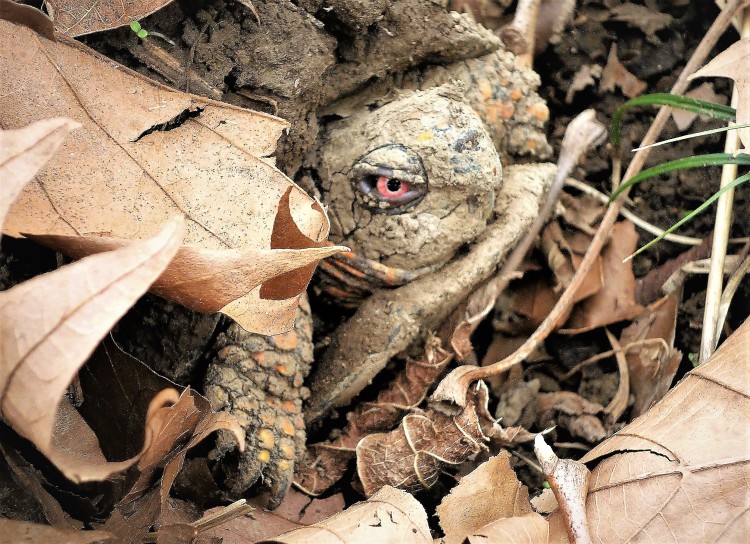 This mud-encrusted head belongs to a Box turtle; one of the first to emerge this spring. I spotted him on 3/27, an earlier date than most of the previous seven year’s first Box turtle observations. But what exactly is he emerging from? Hint – it’s not hibernation. 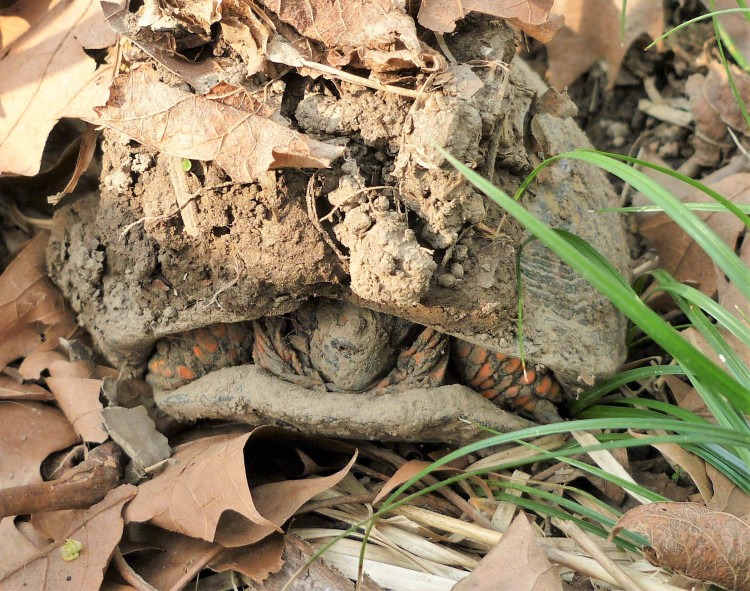 This is him again, the next day – still very torpid but all the way out of the ground. Yesterday he was gone, his burden of dirt no doubt washed off by the previous night’s heavy rain. His winter sleep was never very deep, since reptiles enter a state of dormancy called “brumation”. Unlike mammalian hibernators, reptiles are not deeply unconscious, and may wake and even move around on warm winter days. This is possible since Box turtles don’t usually burrow down more than a few inches, and only dig deeper during very cold periods. In the early spring warmth boxies will partially emerge, often just poking their heads out for a look around.

Why don’t Box turtles brumate deeper in the soil? Their claws are strong enough for the job, a fact I can verify from trying to hold turtles that were struggling to get away! But staying near the surface allows them to be sensitive to air and soil surface temperature, so as to emerge from brumation on time.

To cope with possible exposure to below freezing temperatures, Box turtles have evolved a degree of freeze tolerance. Researchers have cooled turtles to temperatures as low as 25.5 F for 73 hours, during which time all vital signs ceased. But when gradually thawed, these turtles revived fully. As terrestrial turtles, boxies no doubt depend on this adaptation to survive sudden cold snaps, particularly on the northern edge of their range.

Box turtles will be emerging over the next couple weeks, and usually the males are first. Besides eating, the first thing on their minds is finding females to mate with. The first turtles of 2020 are up at least a week earlier than those of previous years, so there will be more time for mate hunting this spring. 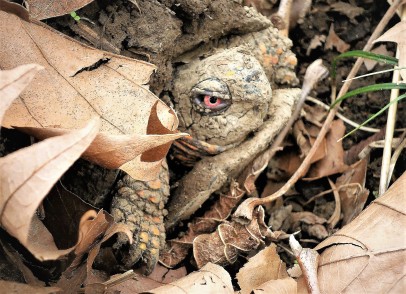