You might guess that North America’s largest woodpecker would go after some pretty big bugs. You’d be wrong though – like a number of other woodpeckers, the Pileated prefers ants. With its formidable beak, the bird is perfectly adapted to dig deep into the heart of trees where Carpenter ants have their nests. I was lucky enough to watch just such an excavation a few days ago. 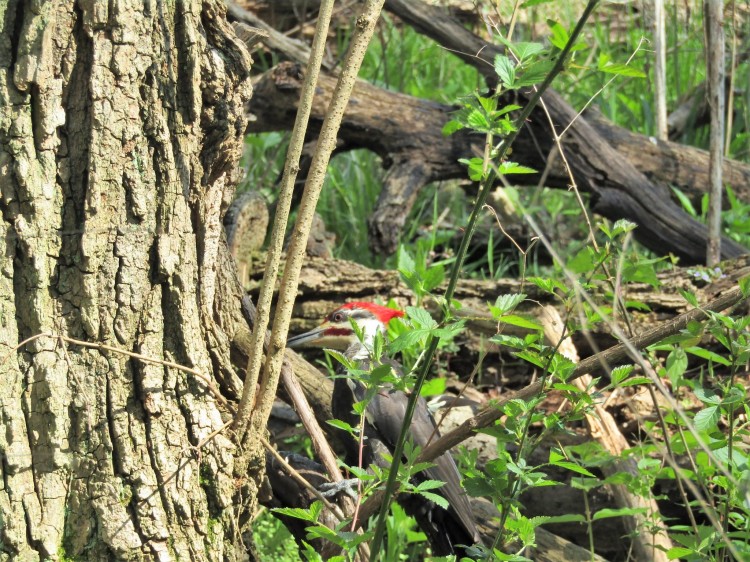 Among the many marvels of this little forest fragment is the healthy population of Pileated (and other) woodpeckers. I don’t know how many there are, but lately it feels like a lot – their loud, high pitched breeding calls ring out from the tree tops. They’re easy to spot in flight, flashing a large white underwing patch as they glide from tree to tree. The male Pileated above was examining the base of an old Black locust when I saw him. It’s likely he could hear and maybe even smell the carpenter ants within, since his attack on the bark quickly commenced.

Pileated woodpeckers digging for ants are very single minded and can often be approached. But getting a picture is another story – they’re a blur of motion as the forceful hammering carries on with few rest breaks.

The photographer must wait for that rare moment when the bird pauses and raises its head, presumably to check for danger.

Whenever I’m watching Pileated woodpeckers, there’s a tinge of sadness, because they remind me of their two larger North American cousins – the Ivory-billed and the Imperial. Both are likely extinct or “functionally” so, that is, with little chance of recovering any sort of viable population. But I’m also happy the Pileated is still here and thriving, having survived the 19th and early 20th century decimation of eastern forests. The Audubon Climate Vulnerability Index for birds predicts the Pileated’s current range may be affected like this at 3 degree C. warming;  86% new range gained, 82% range maintained, 18% range lost. The large amount of potential new habitat is of course in Canada and Alaska.

Back in the day, large woodpeckers including the Pileated were (and some still are) hunted for food and sport. “According to one report, the bird had a sweet and sour flavor to it, not good tasting at all. It was speculated that the sour taste of the meat came from formic acid in ants, the woodpeckers’ primary food item.” 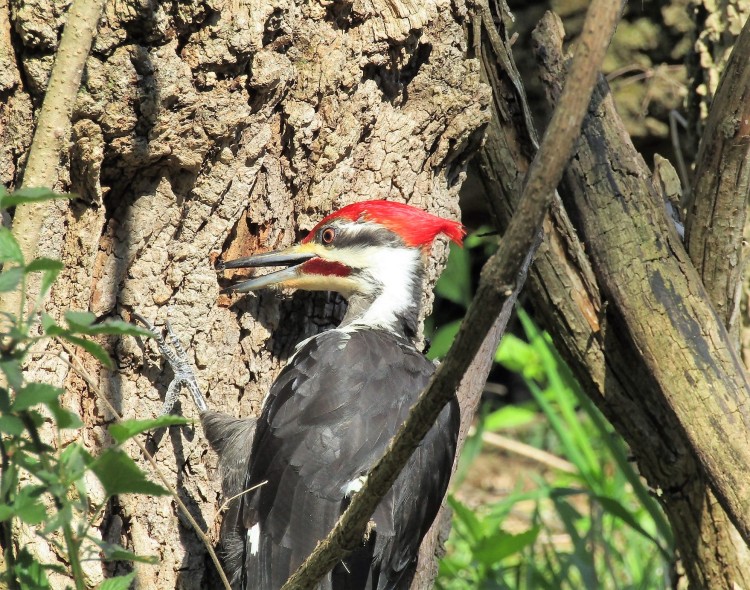 And now this bird seems to have reached the ants, sending its five inch sticky barbed tongue deep into the nest. It can lap them up in great quantities – it’s been found that woodpecker saliva is quite alkaline, presumably to neutralize the ant’s formic acid. About 60% of the Pileated diet is Carpenter ants (which sadly was discovered by analyzing the stomach contents of a number of birds!) 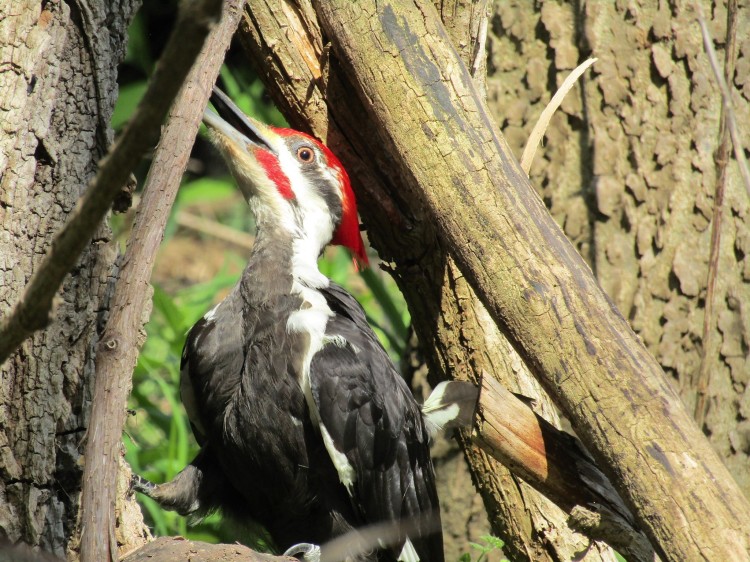 He didn’t stay long at this site; though I saw ants streaming out perhaps they were not as abundant as he would have liked. But I him several more times that day in the general vicinity – hopefully he has a mate and they are nesting somewhere nearby.