And no, I don’t mean this sort of predicament. In fact, there’s not enough of this going on, and that’s a real problem for turtle populations.

As soon as boxies come out of hibernation the mating game begins; male turtles pursue and court any female they encounter. The key word here is “encounter”. Compared to the ways most animals find a mate, the Box turtle’s method is rather hit and miss. Turtles doesn’t vocalize, nor do they use a pheremonal scent attractant or any other chemical cues (as scientists had speculated). A long term study has found that Box turtles …just… bump into each other. That’s it – and if they don’t, no mating will happen. We have biologist Dr. Bill Belzer (who dedicated his career to saving box turtles) to thank for this and many other important insights regarding their conservation.

A Nine Year Study of Eastern Box Turtle Courtship with Implications for Reproductive Success and Conservation in a Translocated Population by Dr. Bill Belzer   http://www.chelonian.org/ttn/archives/ttn6/pp17-26.shtml

I’ll draw tidbits from the study in this post, but I hope you’ll read it all (it’s more entertaining than you’d think).

In the study, female turtles were placed behind low barriers and other obstacles in a variety of conditions. Male turtles were released near the barriers and typically strolled right by; however just one glimpse of a female would send them chasing her and attempting to mate.

The fact that Box turtles have no way of detecting each except by sight tells us they were formerly very abundant. There was no need for an adaptation that would aid them in finding each other. But things have changed quickly; most of the populations that were first studied in the early to mid 1900’s have declined as much as 80% over the years, even though they are in “protected” areas such as nature sanctuaries. Habitat loss and fragmentation from surrounding development, collection for the pet trade, car and mower mortality, and egg plundering by raccoons are all taking a serious toll. 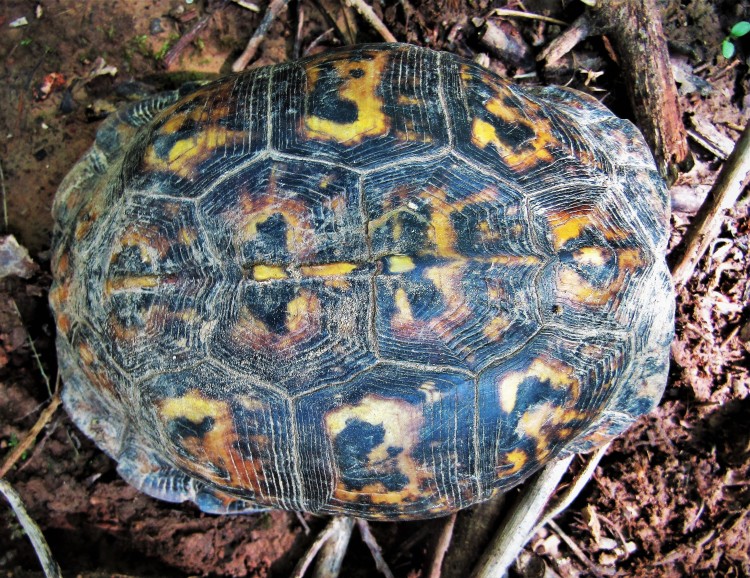 Here at Beargrass Creek State Nature Preserve, in the middle of an urban area, Box turtles seem relatively abundant. This is surprising, considering they’re subject to all the impacts listed above. But numbers can deceive. The older male turtle in the pic above was a new find recently; like many in this forest his age makes him what researchers refer to as a “historical artifact”. In other words, a population made up mostly of older turtles tells us only that their birthrate and survival was good sometime in the past. If younger turtles are scarce, the population is declining and could wink out as the older ones die. Older males are the most commonly observed demographic in this preserve, with females seemingly half as abundant. This gender imbalance is commonly observed in modern Box turtle populations, but the reasons for it are not well understood.

Back to the meetup problem. Even in the rare populations with healthy numbers of Box turtles, they’re unlikely to be evenly distributed across the forest. All habitat is not equal – low, moist areas with streams and an abundance of earthworms, snails and slugs can support more turtles. Since for the most part Boxies mate only with ones that have an overlapping or adjacent home range, these areas tend to be turtle meetup zones.

In this forest there is such a zone…

…where in a relatively small area, up to 30% of the Box turtles I’ve recorded in this entire forest seem to hang out. This local density, hopefully, ensures more mating.

Even mating and laying eggs is no guarantee there will be more baby turtles, since researchers estimate that nest predators, mainly the over-abundant raccoon, find and eat most eggs. It’s also thought that female turtles may be declining because they venture out to sunny forest edges to dig nests, where they may encounter mowers. I’ve seen dead Box turtles here on a number of occasions that were crushed by mowing machines. It’s even been speculated that Bush honeysuckle’s dense shade lowers the temperature of turtle nests, thereby producing more males. As with other turtles, the temperature of Box turtle eggs in the nest influences their gender.

The Forest Stewards are responsible for ongoing habitat restoration at Beargrass Creek State Nature Preserve, and we hope it will help the forest’s Box turtles thrive. Invasive plant removal, and planting of native species encourages a greater diversity of native plants for food and cover. Bush honeysuckle removal in particular, has left sunny openings that may allow female box turtles to choose safer nest sites.

It’s sad that such well known animals as Box turtles can be declining even as they’re perceived to be abundant. In Kentucky, Box turtles can still be found easily, and our laws  still allow collection of wild turtles. In many adjacent states including Indiana, and most of the Northeast, it’s illegal to collect or own them (though almost impossible to enforce). So I’m not too hopeful overall about the future of Box turtles, but it’s a situation where education may help. Please check out this link from the Eastern Box Turtle Conservation Trust and pass it on.      https://www.ebtct.org/a-vanishing-species

Writing about Box turtles can be a downer, so I went looking for a hopeful quote to end with. Found more than I bargained for – from Republican Senator John Cornyn of Texas, “Now you must raise your children up in a world where that union of man and box turtle is on the same legal footing as man and wife” (!)