Between the big trees and the herbaceous layer there’s an important but often neglected zone. In this little forest fragment, and many others, it’s the one occupied primarily by invasive shrubs. A popular feel-good activity for volunteer groups and scout troops is the removal of these plants. I’ve led many such events – by the end of the workday, viewing the clearcut of massive bush honeysuckle, there’s always the feeling we’ve done something good for the forest. But have we really? 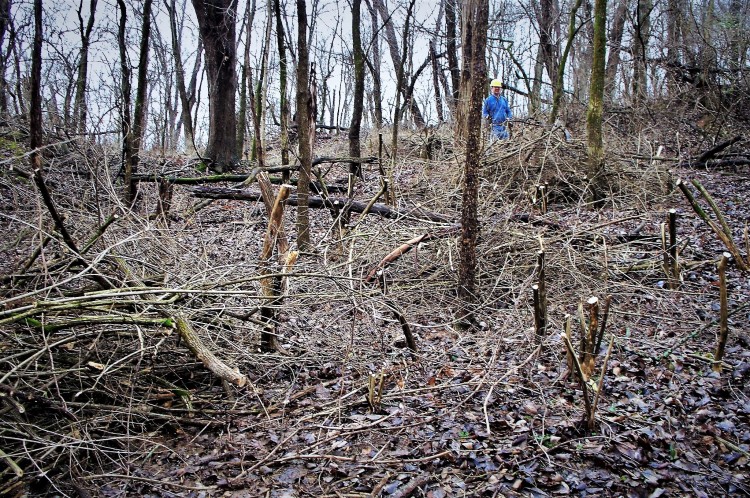 I’ve been asking myself this question, since the Forest Stewards are on the point of achieving something that would have seemed impossible just a few years ago – the removal of most invasive shrub species from the 41 acre Beargrass Creek State Nature Preserve. In the northernmost 10 acres of the preserve, which was most heavily invaded, the landscape now consists only of scattered trees and lots of down brush. Our intensive efforts are motivated by a USDA contract that provides small payments for invasive plant removal. To receive all payments, we’ll be required to foliar spray invasive shrub resprouts and seedlings for two seasons following their initial removal. The hope is this will prevent speedy reinvasion from the seed bank. But this is a damaged landscape, with minimal diversity in the seed bank.  If not invasive shrubs, what can we expect to grow on these sites?

To understand the possible outcomes of invasive plant removal, we need to look at how the forest got to be the way it is now. Invasive plants are not intrinsically “bad”, but rather are opportunistic replacements for what was once here. The severity of an invasion often indicates the degree of disturbance and damage a landscape has undergone, leaving many niches open for fast growing exotic plants. Removal of large understory-dominating shrubs like Bush honeysuckle unfortunately leaves that niche wide open again, resulting in a boom/bust cycle of re-invasion and removal – particularly if the same plants are still abundant in nearby natural areas.

Another possibility, more likely on sites with heavy shade and deer pressure, is the regeneration of practically nothing in the understory layer. Again, in the case of a degraded forest fragment, the lack of site adapted native plants in the seed bank is the problem. This situation is also commonly seen in eastern forests with high deer pressure, where seedlings of preferred trees and shrubs are eaten, leaving an unbrowsed layer of ferns.

So, considering the two most likely outcomes of removing heavy infestations of invasive shrubs, one begins to wonder if it’s worth the trouble. For wildlife habitat, something is  surely better than nothing. The fact that the seeds of these plants are so easily dispersed by birds attests to their popularity as a food source, and research is showing that berry-producing invasive plants can help migrating birds.  “Mass change values of landbird migrants at an inland stopover site dominated by nonnative vegetation.” American Midland Naturalist    https://doi.org/10.1674/amid-175-01-82-90.1

Though I may sound like an advocate for invasive plants, that’s not the case. But when one mulls a problem over for awhile, the solution no longer seems simple. Eliminating  troublesome species of plants does not necessarily restore the habitat value of a forest, or any piece of land, for that matter.

Ideally the answer would be a huge budget for native trees and shrubs, and an army of people with shovels. Every invasive plant removed would be replaced by a native tree or shrub. We’ve likely killed hundreds if not thousands of mature Bush honeysuckle and Privet shrubs by now, so considering that the wholesale price for a three gallon native tree or shrub, plus deer fencing, is about $15.00 to $20.00 – the restoration challenge is obvious!

Not having that kind of money, the forest stewards are plugging away at a technique I’ve touched on in previous posts. Seven years ago we started understory restoration with plantings of nursery grown 2-3 foot bare root Spicebush, Lindera benzoin. This common understory shrub of moist Eastern forests was chosen because it’s one of the few native shrubs that can still be found in our little fragment. And thanks to its amazing recruitment powers, we now have the opportunity to use a more local source. As available sunlight has increased, this berry producing, bird dispersed shrub is springing up abundantly near mature parent plants. The young plants are often crowded at these natural “nursery” sites, allowing for a good deal of careful thinning. The plants sourced this way are larger, with better root systems, and endure much less time out of the ground.

Obviously we can’t put a shrub everywhere it’s needed, so planting ten or more Spicebush together as a “starter” patch seems an effective use of resources. Placing them on sunnier sites will enhance berry production, and over time they’ll colonize the areas around them by seed. This planting strategy coincides nicely with the death of most mature ash trees, since the forest is left with many more light filled gaps.

An understory layer composed of Spicebush tends to be more open and less competitive to the recruitment of other native shrubs and trees. Spring ephemerals in particular benefit – Spicebush is much slower to leaf out in spring than most invasive shrubs, giving early spring wildflowers plenty of sunlight before the canopy closes.

As evidence that Spicebush has been in the Eastern forest biome a long time, it’s one of the most important larval hosts for its namesake butterfly, the Spicebush Swallowtail. One of the best perks of restoration work is seeing these forest butterflies flitting through the understory. 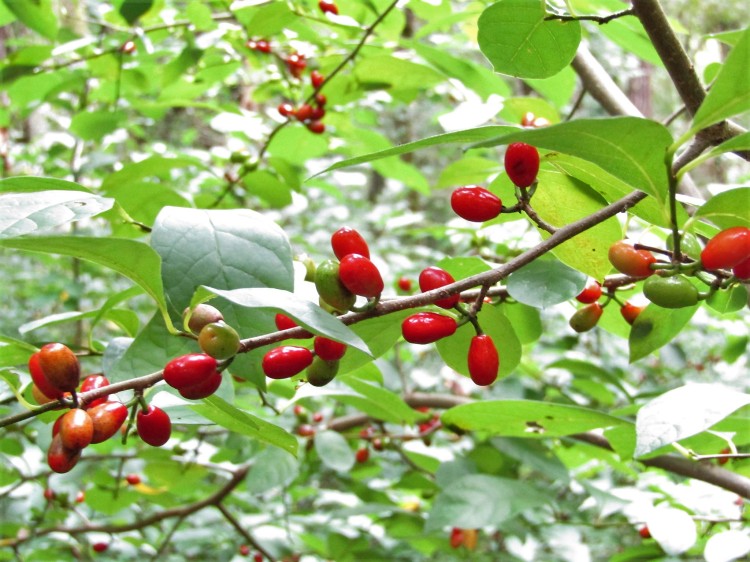 And if you want to find a thrush during fall migration, a Spicebush patch with ripe berries is the place to be.