Walking down the trail on one of those dreadfully humid days last week, I was lucky enough to spot this bird. Truthfully, he would have been hard to miss; his attitude of unconcern was striking. I’m pretty sure this is the same Pileated Woodpecker featured in my post from 4/9, “Big Woodpecker” – the one that persuaded me to get a better camera. 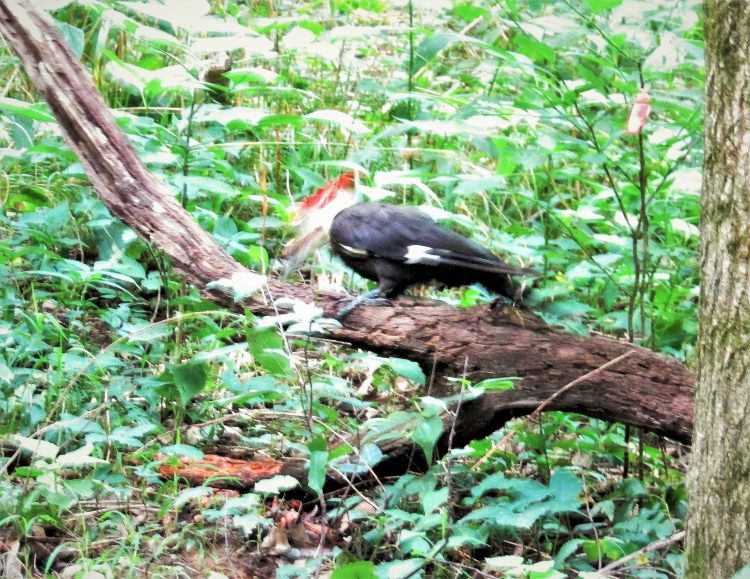 The problem of course is not with my camera, as anyone who’s tried to photograph Pileated woodpeckers knows. Their foraging habits revolve around their favorite food – Carpenter ants, which nest in decaying wood. The purpose of the formidable chisel beak is to rip into these colonies, wood chips flying in all directions. It’s wonderful to watch and frustrating to try to capture in an image. Most of the 40 or so pics I took looked considerably worse then the one above.  I should have made a video.

However, as I kept watching, this bird’s foraging pattern revealed a window of opportunity. He wan’t quite as unwary as he seemed, at least in regard to dangers other than me, and every 10 seconds or so he lifted his head briefly to scan the surroundings. And likely to swallow a tongueful of ant larvae.

Though I was creeping ever closer, he didn’t perceive me as a predator. Was he so used to seeing people in our small urban forest that he’d become indifferent? Was this individual woodpecker just more single-minded and unwary by nature? Another Pileated was nearby, and called several times, but kept its distance.

Animals surely have individual personalities, as we know from our pets. Box turtles I meet in this forest react in a variety of ways, especially when I try to get a pic of their underside for my records. Some pull in and stay there, others alternately peep out and retreat, and a few struggle vigorously to get away, raking me with their sharp claws. The latter response would obviously be a poor one with most predators, leading me to think these turtles may have had previous encounters with humans, as well as more assertive personalities.

It’s possible these personality traits can also be selection factors that allow some animals to thrive better than others in urban areas. A somewhat anxious animal in our forest  may be well suited to dealing with the real dangers posed by predators, but conversely could overreact and become stressed out by continual encounters with people. So, urban animals that are less reactive to the presence of humans could perhaps be healthier, and consequently have more healthy offspring – to whom they may pass on these traits through genetics and/or learned behavior.

These ideas came to me, in part, from reading an excellent little book “The Inner Lives of Animals” by Peter Wohlleben (author of the similarly titled book about trees). The writer manages a forest reserve in Germany, and he and his family also live with a variety of domestic animals. His insights are allowing me to wonder more about the individual personalities of the animals around me, and what they may be thinking.

I hope I’ll continue to have encounters with this particular Pileated woodpecker, who seems to have good survival traits for the Anthropocene. It’s just another one of the amazing things the inhabitants of an urban forest can teach us, if we want to learn.