Eleven to fifteen days – that’s how long Blue-gray Gnatcatchers incubate their eggs. The nestlings were hatched right on schedule; the one above likely is the firstborn of the brood.

For the next few weeks the parent birds will spend every waking minute bringing an ever increasing number of small insects for the fast growing nestlings. In one study of nesting behavior, the number of feeding trips by the adults was measured. By the twelfth day (almost fledged) five gnatcatcher nestlings were being fed sixty-seven times in two hours!

“The adults immobilize all large prey that they obtain for the young by beating it against a perch. The prey is carried to the nest in the tip of the beak and usually placed head first into the nestlings’ mouth. If a nestling has difficulty in swallowing the item, the adult removes the prey and repositions it in the nestlings’ mouth. Sometimes prey that is taken from the nestling is beaten and mandibulated by the adults before it is again fed to the young.”  The Behavior and Reproductive Success of the Blue-Gray Gnatcatcher, Richard B. Root 1969 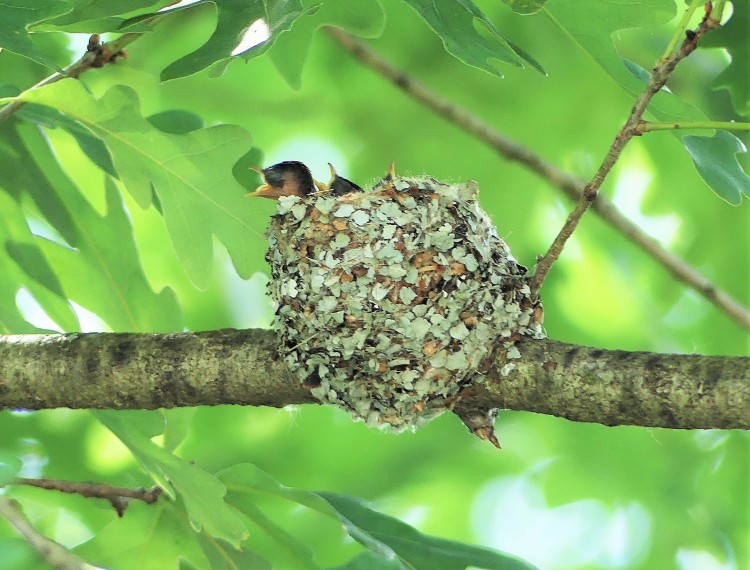 Only two days between the above and below images; they all have have feathers now and one opens its eyes some of the time. Hard to believe, but in less than ten days they will fledge.

I tried repeatedly to get an image of the insects parents were stuffing into open mouths, but they were too quick for me. 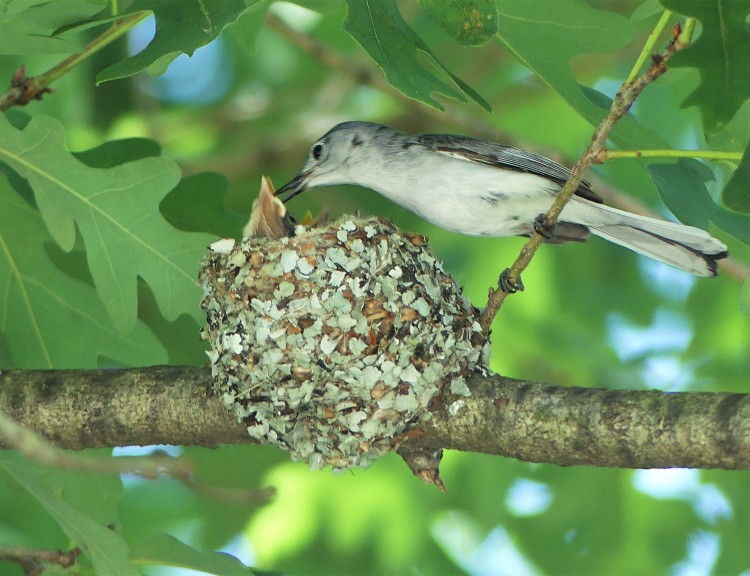 Most visits to the nest were extremely short, and the parents dashed away before the nestlings had time to get excited.

At this visit yesterday, the father lingered a bit longer, allowing a good view of the black facial “V” found only on breeding males.

In my human emotional way, I’ve become quite attached to the outcome of this nest. Each day I approach it with dread, knowing that a nest predator may have found it momentarily unattended. But if the nestlings don’t survive, the parent birds have a plan.

“A pair of Blue-gray Gnatcatchers can build up to seven nests in a breeding season. They often re-use nest material from previous nests, which speeds re-nesting. This can be essential to breeding success, since predation, nest parasitism, or mite infestations frequently cause nest loss and brood failure.” All About Birds, The Cornell Lab