The Red-shouldered is a forest hawk, smaller than the Red tailed hawk but larger than the Cooper’s. Find a bottomland forest with an open understory, near water, and there you may see them. Fortunately their habitat needs are a perfect match for this little forest, so the noisy calls of at least one resident pair can be heard throughout the year. And they’re successfully raising young too – yesterday I was lucky enough to see this young Red-shouldered hawk apparently off fending for itself.

In the opening pic she’s busy wiping her beak on the branch, to remove the mess of a just completed meal.

You can see a portion of it in her beak as she scarfs it down. The image is too blurry to determine just what she’s eating, but it looks vaguely grey and furry like a mouse or vole. If she caught it herself that’s a very good sign – the hardest challenge for young hawks is to become good hunters, and less than half survive their first year. She (I don’t actually  know the gender of this hawk) likely hasn’t been on her own for long, since Red-shouldered parents will continue to bring food to their young till they are up to nineteen weeks old.

And she isn’t entirely on her own, since at the completion of the meal she lifted her head to scan for her parents, who began calling nearby. Red-shouldered hawks are some of the most vocal of North American raptors; their calls are often mimicked by Blue jays. 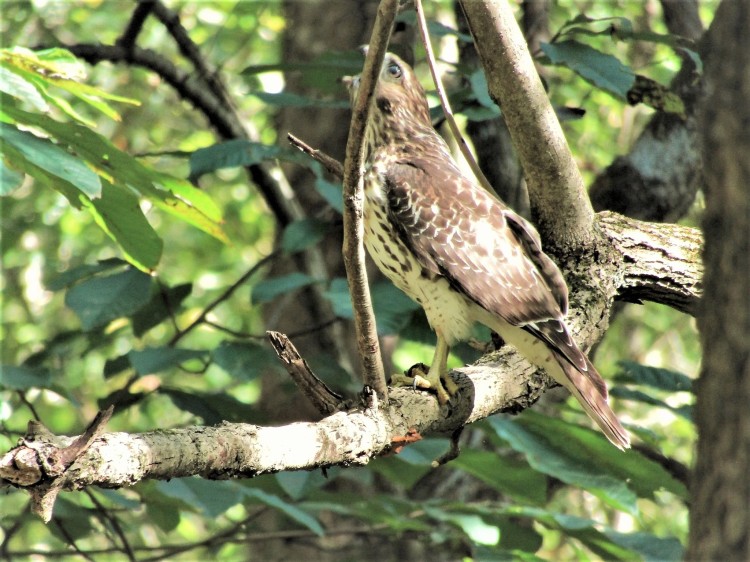 She called in reply just before taking wing. Though it’s possible her parents provided that mouse, I like to think she was proudly announcing what a successful hunter she’d become.