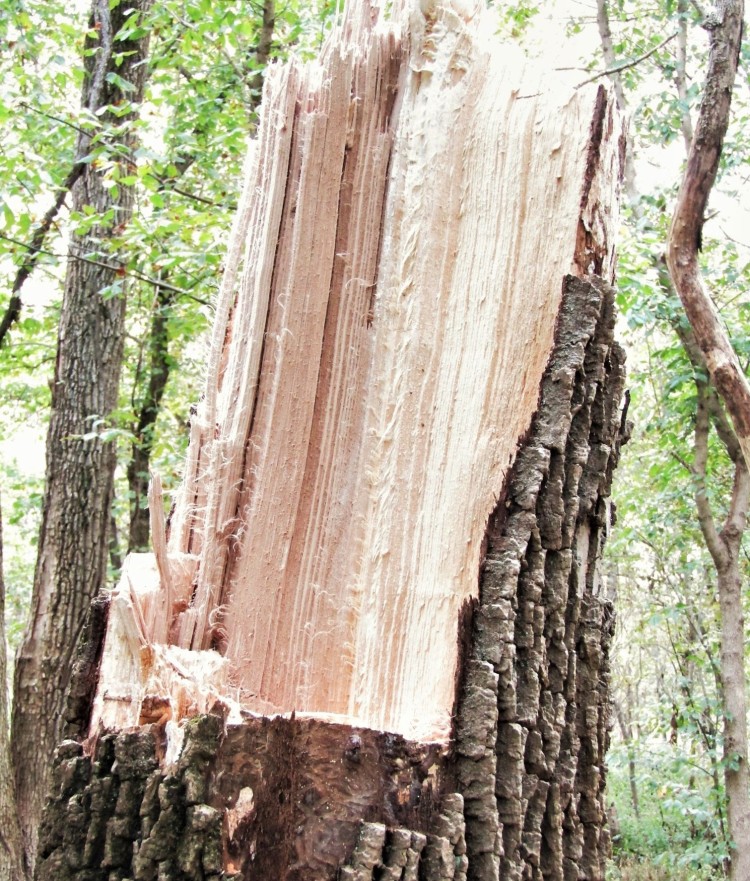 Another tree is dropping out of this little ecosystem. Though ash trees (genus Fraxinus) will still grow from seed and become saplings, nearly all older trees here will die and fall within the next ten years. In health, before the Emerald ash borer (EAB) arrived, they likely accounted for 40% of the canopy. As with the American chestnut and the American elm, the disappearance of these pillars of the community will have a profound effect on eastern forests.

It’s a rather sudden event that’s going to happen more and more often – a loud crash, audible at some distance, and there it is laid out on the forest floor. Often a nearby tree is brought down as well, and large chunks of ash tree may be scattered about some distance from the impact. Looking closely one can find, etched in the dead cambium layer, the squiggly meanderings of the EAB larvae that killed the tree.

One obvious first effect of a large forest treefall is an increase in what foresters refer to as CWD, or coarse woody debris. The forest floor in this little fragment is already well supplied with with CWD in various stages of decomposition, but I don’t know of any evidence that more is not a good thing.

From Winter wrens to salamanders to Box turtles to fungi to skinks to Pileated woodpeckers to millipedes – the list could go on and on – coarse woody debris is a valuable part of the forest. 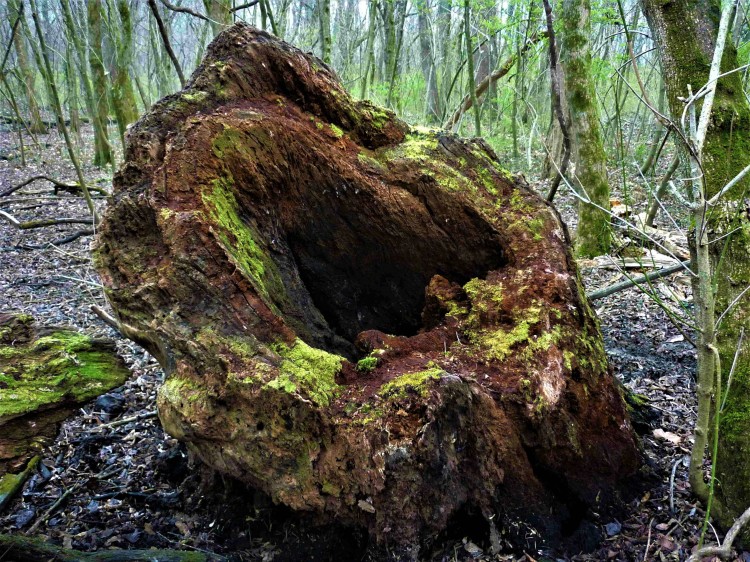 And then there’s the matter of so much more sunlight reaching the ground. Every time a large tree falls in a closed canopy forest, a light-filled “gap” is created. Some plant species, like Pawpaw, are gap opportunists, expanding clonally when conditions are good. The seedlings of oak and sycamore need a lot of light to flourish, and depend on gaps forming regularly – it’s the way the forest is reborn.

However, one of the effects of 20th century fire suppression has been a reduction of natural gaps and increased “mesophication” – moister, shadier forests composed of a high percentage of late successional, fire intolerant species like Sugar maple. This forest, with its low representation of oak and hickory trees, has been part of the mesophication trend. But now the loss of a dominant canopy tree may be an opportunity for revival of many native plants including oaks – particularly if we are proactive about encouraging them.

The above image from 2017 shows a shady understory, typical of much of this forest at the time, which is devoid of anything but invasive privet and wintercreeper. The image below is from this spring (not the exact same site but nearby). The change is striking.

Over even a short time period we have observed that the increased light levels from ash tree die off and invasive plant removal, plus seeding with native grasses, is helping revive a lush herbaceous layer. It’s not everywhere, but is spreading as a more diverse seed bank develops. 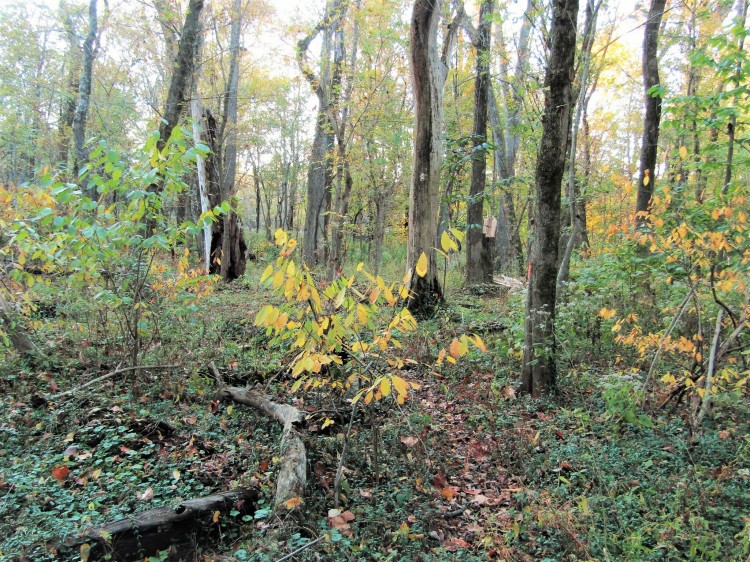 Above the herbaceous layer stand the shrubs, in the case of this forest mostly absent after invasive honeysuckle and privet removal. In the images above and below, young Spicebush and Pawpaw are finally raising their heads on two formerly very shady sites. 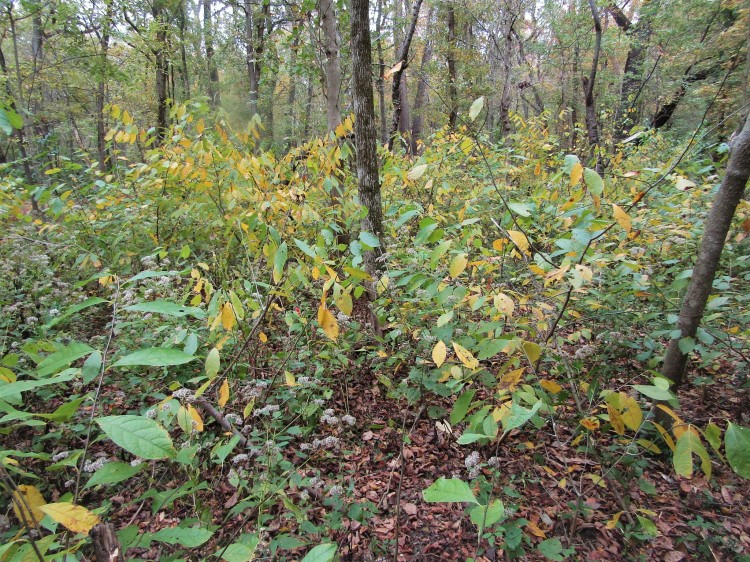 With increased light, Spicebush seedlings that were tiny a few years ago, are now three to five feet. The more low cover of all types, the more habitat for Towhees and other ground nesting birds. I alarmed a family with several grown young while taking these pics, but only the male revealed himself long enough for me to focus.

In this post I have intentionally highlighted some positive effects, in one small forest, of the loss of a tree species (most of a genus, in the case of EAB). There are undoubtedly many adverse consequences as well. But I’ve tired of the hand-wringing that’s usually employed to describe such occurrences.

Portraying environmental change of all sorts only in the negative, I believe, underestimates the adaptive power of nature. I grew up with the notion of the “forest primeval”, envisioning eastern woodlands as an unbroken expanse of what we used to call virgin timber. More recent research is proving this was not at all the case. Many species are fire adapted, an indication that fire was important historically, even prior to the last 10,000 years or so of relatively intensive human management by fire. These were dynamic forests with a patchwork of different age stands, and a wide range of habitats from very early successional to old growth.

So at least in the case of EAB, it’s worth asking – is it catastrophe or opportunity – or both? 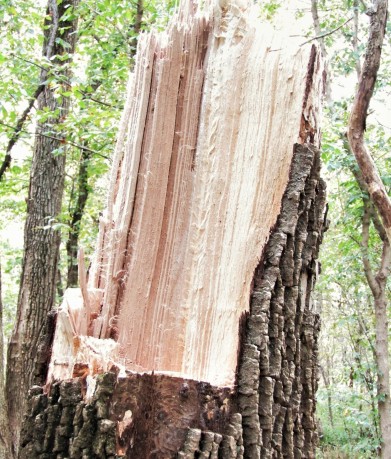