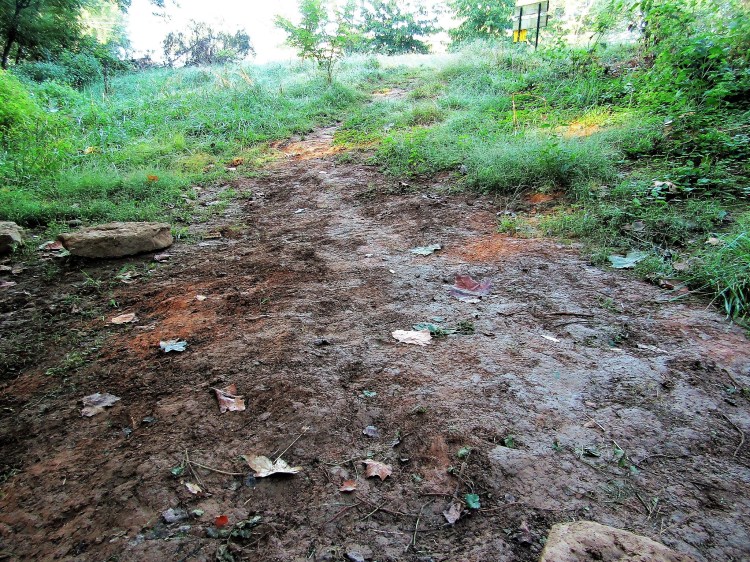 It’s been rough the past few weeks. Unlike the creatures that live in this forest, I’m not well adapted to coping with the three H’s – Heat, Humidity, and Hordes of mosquitos. But after my first trail building adventure, I felt empowered to take on another much needed reroute. This one turned out to be considerably more of a challenge. Steep terrain, invasive plants, drainage problems, and miserable working conditions all conspired to make it harder than expected. And as more and more soil was gouged out of the trailbed by heavy rains, it was apparent the trail needed to be moved soon.

As you can see in the opening pic, the front entry trail below the LNC parking lot plunges down a steep hill. Various routes have been attempted over the years to convey hikers to the base of the hill, all of which have resulted in considerable erosion damage. This summer’s torrential rains speeded the process, to the point where the trail was becoming unsafe. The pic above illustrates it well; the right half of the trailbed at this spot was taken out by heavy stormwater flows over just a few hour period.

The route had been repaired over the years, most recently by an Eagle Scout project that involved wood steps and embedded stones to funnel water out of the trailbed. However, the underlying reality could not be fixed – the trail descended the slope too steeply, ensuring it would inevitably become a channel for stormwater. Finding a better route proved difficult, as the entire hillside presented one hidden issue after another.

As with many things, designing trails becomes more than just that. It’s allowing me to see the entire landscape differently. My hilly neighborhood reveals its once forested slopes and swales, and I’m glad I was never tempted to own a house built in a former stream course. Now I notice every dysfunctional drainage pattern inflicted on the local terrain, and it’s not a pretty sight.

But sometimes the damage is quite hidden, as with the site where I needed to find a new trail route. In the pic above, a dense cover of the invasive vine Wintercreeper, Euonymus fortunei, carpets the slope (the seeds no doubt brought by birds from vines on neighborhood trees). After working on this hillside, I can say with surety that Wintercreeper is very ineffective for erosion control on slopes – its shallow root system merely masks underlying drainage issues.

In this case the slope is being hollowed out by stormwater flows moving below the surface. The paved parking area perched at the top of the hill provides heavier than normal runoff, making for a labyrinth of channels that cave in under a footstep. Not a promising site for a trail route, but one had to be found.

Wintercreeper removal was the first step, using foliar sprays of  herbicide followed by handpulling and whacking with a fire rake – a wonderfully effective tool for heavy weeding consisting of four big sharp teeth attached to a handle. (If you’re trying to eradicate this vine without herbicides – good luck. I have tried for years, and evey tiny bit of root left in the ground quickly regrows.)

The piles of dead vines came in handy for defining the trail edge. 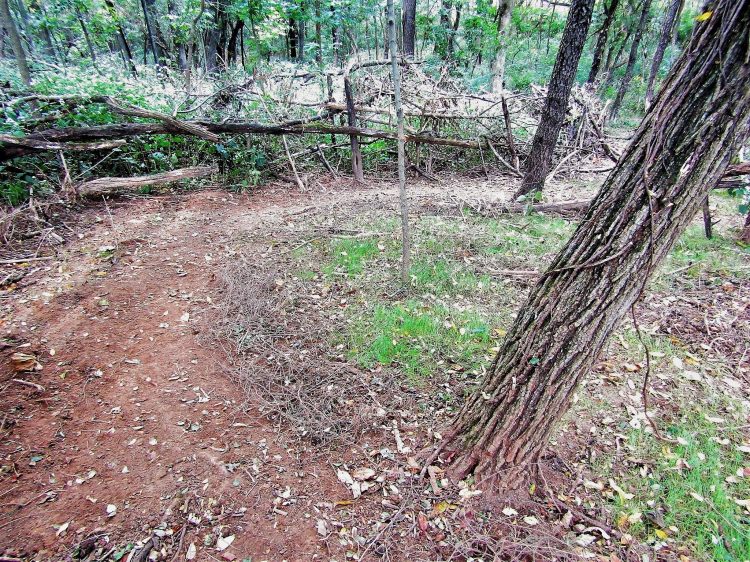 Much meandering about was required to design a trail to descend this short, but steep slope. Complicating matters was the presence of a natural drainage swale right down the middle, as well as one wall of a deer exclusion area that I didn’t want to tear down. 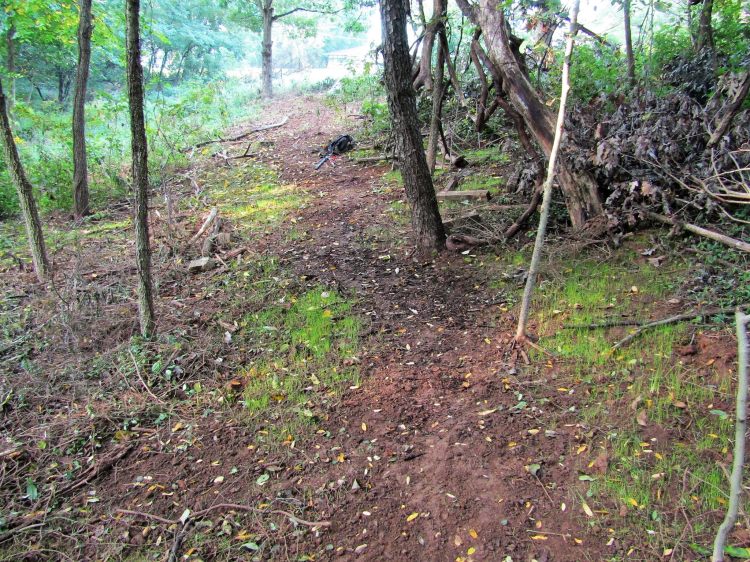 After Wintercreeper removal, slope regrading, and annual rye planting the trail is beginning to take shape.

Switchbacks were used liberally to reduce the steepness of the grade, and allow water drainage off the edges.

By nice coincidence, the Master Gardeners had to remove some big clumps of River Oats, Chasmanthium latifolium, which they donated to me. These were planted in the moister parts of the swale.

The earliest trail route down this slope was a set of railroad tie steps from top to bottom. The edges of several ties are visible in the pic above, where the new trail crosses them. Such constructed “improvements” have convinced me that unless absolutely necessary, wooden water bars and steps should not be used in trails. They tend to substitute for good design and drainage, and ultimately cause more problems. In this case, the steps proved a barrier to drainage, and erosion channels developed on both sides that are seriously undermining the slope.  The trail had to cross them, so I made water diversion channels to try and keep the water draining aboveground.

What’s even harder than rerouting a trail, is trying to help the old trailbed recover so it will cease to be a stormwater channel. That’s a subject for future posts. 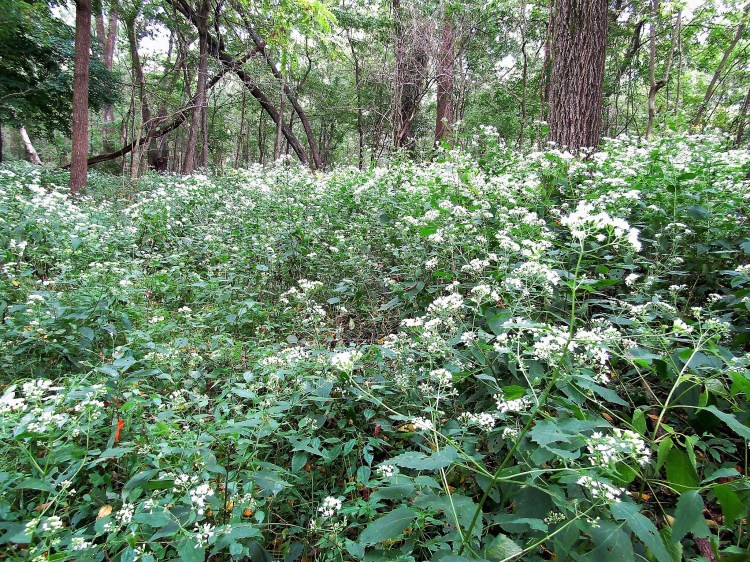 In other forest news, the hillsides in September are a fluffy sea of White Snakeroot, Ageratina altissima...

…with Monarchs and other butterflies nectaring in the blooms. I’ve never seen Monarch butterflies regularly flitting through the forest till this year.

This Question Mark, Polygonia interrogationis, was slowly flexing its wings as it hung from a leaf. They seldom nectar on flowers, but do like rotting fruit, tree sap, dung and carrion.