Now that the last Box turtle has gone underground, it’s time to update my turtle data book. It’s a project I started in 2013, when it became clear there were quite a few boxies in this forest. It was just a couple years since we began major invasive plant removal, and I was spending a good part of every day working in the forest. In the most favorable areas, such as low moist sites near water, I was encountering a really surprising number of Box turtles. Considering this is a bottomland littered with fallen trees and stumps, the habitat should be excellent. But is this the only reason for the abundance of boxies? It occurred to me there is another important factor. This little 80 acre fragment is bordered on two sides by a deeply channelized creek, and buffered on a third side by a large park. Though completely surrounded by the city, the box turtles here are relatively sheltered from one of their greatest threats – cars. 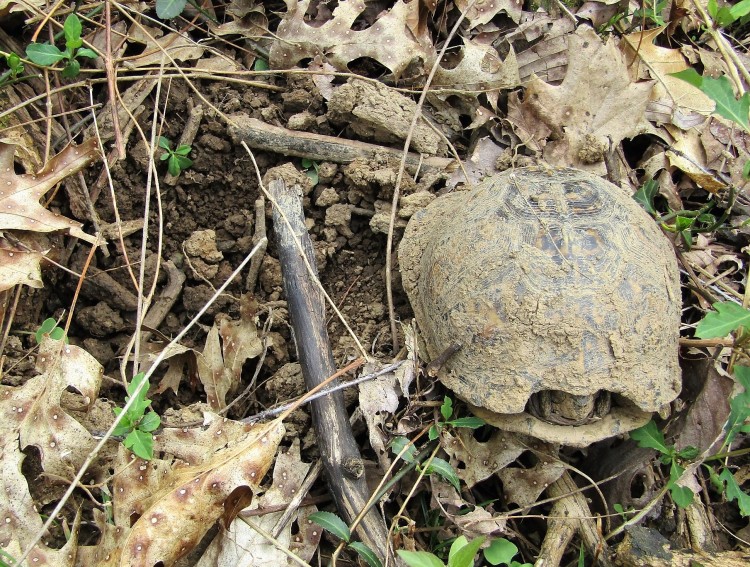 On 4/4/2019 I met a recently emerged box turtle resting near the opening of his hibernacula (he’s the one in the opening pic.) Though this mud crusted turtle appeared rather torpid, he was just waiting for his chance. My notes say I walked back up to the trail to retrieve the data book, and when I returned in two minutes he was gone. This is a common Box turtle ploy it seems – as soon as the predator is momentarily distracted, toddle off as quickly as possible. I observed him later that day about 30 feet downslope.

Two days later and not far away, another male was out and about, mostly well washed by the day’s rain. There’s only a trace of winter mud left on his rear end.

And on 4/11, yet another older male was just emerging close to the location of the well-washed one. These two had both apparently hibernated quite near a really large fallen Red maple tree.

By 4/18, with warm temps and rain, a majority of boxies had likely emerged. On that date a biology class led by Dr Omar Attum, managed to collect five turtles in less than two hours (four of which were then fitted with radio transmitters).

One small turtle did not get a transmitter since she weighed less than the minimum 400 grams. She appears to be a younger turtle, which is always very good news for this mostly older population. I am able to count eight clear growth lines on her center scute, which means she is just reaching sexual maturity.

So why bother to collect all this data – is it just an interesting hobby or does it really mean anything? Obviously the longer the data is collected on this population, the more can be gleaned from it. But even the small bit I have shared so far in this post has importance. So far we have learned approximate dates of first emergence from hibernation, location of hibernacula, gender and age of turtles observed, etc.

When a long term set of data such as this is compared and contrasted with other studies, it’s like having another puzzle piece fitted into the picture. Issues that increasingly plague all Box turtle populations can be understood better.

This rather cumbersome title of a 2014 study highlights one such issue, which I will try to explain: “Relatedness and other finescale population genetic analyses in the threatened eastern box turtle (Terrapene c. carolina) suggest unexpectedly high vagility with important conservation implications“.  Steven J. A. Kimble, O.E. Rhodes Jr, Rod N. Williams.

Due to habitat fragmentation and the sedentary nature of Box turtles, researchers hypothesized that relatively isolated populations would have a high degree of relatedness. Though some turtles are known to be highly transient, it was expected that most stayed home. But this genetic study of turtles at four different sites showed, in a nutshell, that over 90% of pairs of individuals were unrelated. “Vagility”, in case you didn’t know (I didn’t) means “the ability of an organism to move about freely and migrate”. And apparently Box turtles do, much more than we thought. There are good news/bad news implications – while the ills of population bottlenecks, inbreeding, etc. may be less likely, turtles are not staying safely at home in their little forests. They are out wandering about in the dangerous landscape of the Anthropocene.

Before I saw this study I had already suspected relatively high genetic diversity among boxies in this little forest, just based on the unscientific observation that many of them look wildly different from each other. 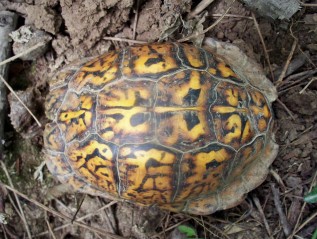 Above is a sampling of carapace patterns of turtles who live, at most, no more than a quarter mile apart. Several of these live within just a few hundred feet of each other. I’m aware of one source of fresh genetic diversity –  I’ve actually met folks walking into the forest with a boxie in their hand. Turtles likely leave the forest this way too, like the one that I was allowed to bring home as a child. 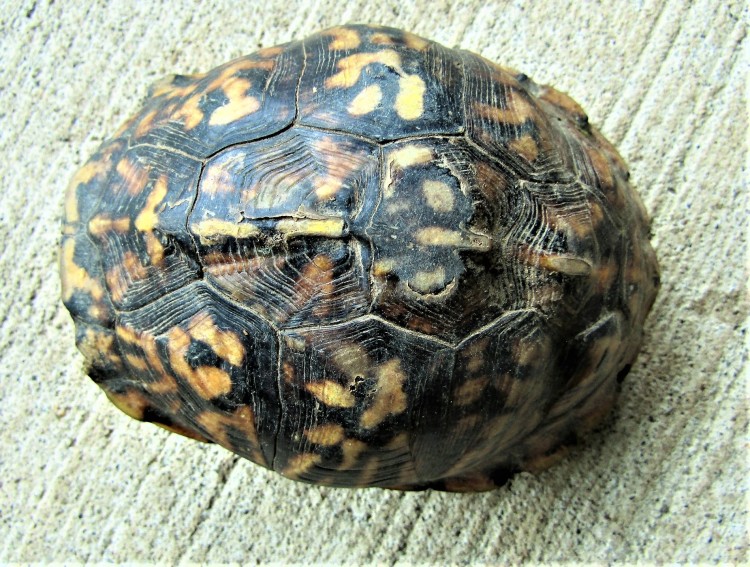 On 5/19 I met this older female in front of the Louisville Nature Center. It was raining lightly and she was headed toward the garden – perhaps to nest? I interrupted her day to glue on a radio transmitter. Though small, she is an older turtle judging by the wear on her scutes. She’s likely made many forays out of the forest; the healed damage on top of her carapace may be a mower scrape. 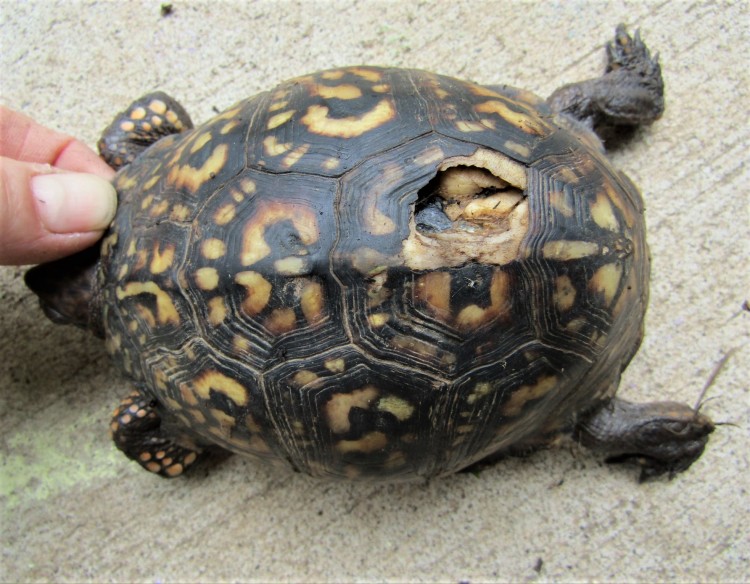 On 6/6, another female who lives on the edge was picked up crossing the road near the LNC, and brought there by a concerned jogger. Seeing the round injury on her carapace, he thought she’d been shot. Likely it’s a poorly healed mower scrape, less dramatic but sadly very common. These two females were lucky to survive; many who venture out to sunny edges and meadows to lay their eggs are crushed by mowers. 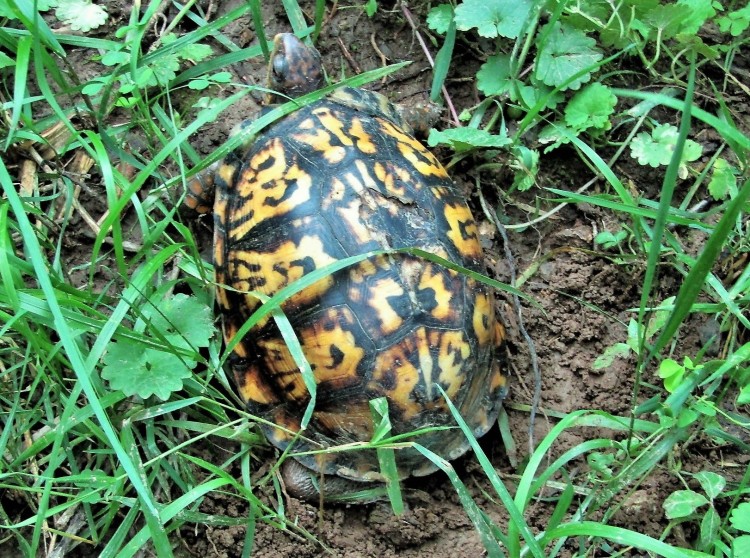 On 6/8 the female above (again with carapace damage) attempted to dig a nest at the edge of the trail below the LNC parking lot. She eventually abandoned the site, perhaps the soil was too compacted or she was bothered by the number of walkers who stopped to watch.

June was the month for seeing female turtles – between 6/3 and 6/22, six females and one male were observed. Most of the females were in open areas at the edge or outside the forest, seeking a place to nest. Researchers have documented Box turtles returning to the same sites year after year, but the studies are few due to the difficulty of observing turtles just when they are nesting.

As fascinating as this recap of data may be, for the sake of my reader’s attention spans I’ve decided to write the post in two installments. So look for the the rest of 2019 in turtles very soon!